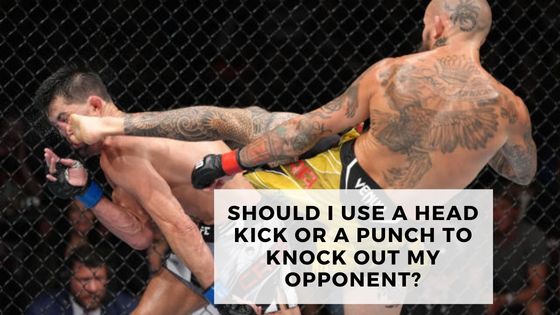 The whole planet saw the Usman vs Edwards at UFC 278 fight and how Edwards delivered – according to many – the best ever ‘Hail Mary’ head kick knockout in history.

It proved just how devastating a head kick can be when it’s landed flush.

From MMA to kickboxing, it’s a situation that nobody wants to be in – only a scenario that many fight fans like to witness instead. So, can a head kick knock somebody out, even if it’s blocked with your hands or arms?

FIRST: UNDERSTAND THE SWEET SCIENCE BEHIND A KNOCKOUT

I’m pretty sure that many have heard of the term, Sweet Science, which is a term used in boxing. Let’s just say there’s a term called Sweet Science of headkicks.

A knockout in this scenario is no different.

9 times out of 10 we think that a knockout is a result of a one-hit wonder – but in reality, it’s an accumulation of deadly hits that build its way up the ladder. Consequences can be sometimes fatal.

Whenever someone gets hit to the head, the nerves start to absorb wear and tear. Potassium within the nerves exchanges its place for calcium.

With each blow that delivers, the balance gets harder to maintain. Eventually, at some point, this becomes too much, and the brain spends all of its energy.

The damage has been done, and the body’s ability to repair itself does not work. This results in what we know as a knockout.

After a hard blow to the head, the heart must supply sufficient blood flow for the brain to repair itself.

If the demand outweighs the supply, the brain then shuts down and leads to an eventual loss of consciousness

WHAT HAPPENS TO THE BRAIN AFTER A KICK?

A punch causes the brain to get ‘rattled’ and in the event that a knockout does not happen, it reduces speed and awareness.

Imagine what a kick does! Knowing that it is five to ten times deadlier than a punch, the effects can be a lot worse.

The nerves start to slow down and essentially, it’s the beginning of the end. One by one, the kicks – and it won’t take many of those – will put someone away. It then starts to have a weary effect on the body as it wears down.

We’ve seen this happen at the Georges Saint Pierre vs Matt Hughes 2. In the 2nd round the dominant Canadian landed a partially blocked headkick to Hughes’ temple to earn his shot at UFC 65. This headkick landed flush for St Pierre.

Most recently, at UFC 278, Leon Edwards vs. Kamaru Usman. An Edwards faint step headkick – which was blocked partially by Usman – sent the world into a frenzy as it connected regardless and created a new UFC welterweight champion.

THE SCIENCE BEHIND A KNOCKOUT

THE ONLY WAY TO AVOID BEING KO’D WITH A HEADKICK

The best policy is to avoid fighting. But if your opponent decides to punch his way into town, the whole idea is to evade those punches (and kicks) as much as possible.

Try to limit the range of your opponent’s kicks by closing the gap. Be creative and calculate the distance.

Kicking their legs repeatedly can cause them to abandon their initial head-kicking plan, as they would be more preoccupied defending themselves from your kicks.

The idea is to not get your head kicked, so the closer you are to your opponent’s body the more chances you have to neutralize their kicks.

Parrying the kick could also be an option, but the chances of you breaking or fracturing your hands and arms raise significantly.

Can you still get knocked out if you block with your arms?

It certainly is possible.

Guards are not unbreakable, there is always a possibility of getting your guard penetrated, or worse, getting knocked out.