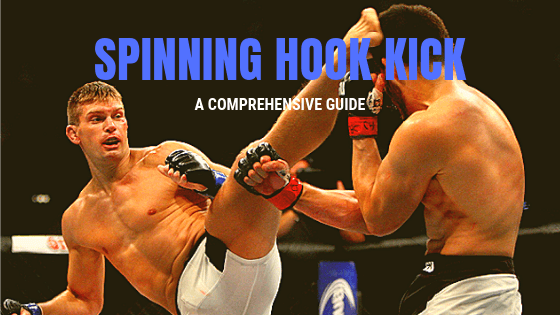 Fighters and spectators are thrilled when a Spinning Hook Kick connects. As majestic as it looks, the Spinning Hook Kick also referred to as Wheel Kick, Reverse Turning kick, Spinning Whip Kick or a Reverse Hook Kick, is one of the most devastating kicks in martial arts. Not only does it commercially sell but the impact it leaves on the opponent is unmatched.

No fighter wants to be on the receiving end of a spinning hook kick. If you follow mainstream MMA, you must have witnessed Edson Barboza knockout Terry Etim with a venomous spinning hook kick. The impact you see in the video is exactly what this kick can produce in a combat.

A Spinning Hook Kick is a heavy impact kick and is amongst the oldest spinning kicks. However, just two decades ago, spinning kicks as a whole were considered too risky especially in a bout which involved experienced fighters. Nonetheless, with the advancement in footwork and contemporary strategies, spinning kicks especially the spinning hook kick has gone on to become the most lethal weapon in a martial artists’ arsenal. The growing craze of the spinning hook kick can be fairly attributed to the upright fighting stance along with the enhancement of intricate footwork. Traditionally, fighters used to prefer a low stance in order to generate greater power however. It’s not the same with spinning hook kick.

It begins with a normal fighting stance followed by a pivot and chambering of legs. A fighter then proceeds to swing a leg towards the target using a knee as a hook to whip through the opponent’s head. This helps the kick to generate tremendous power and leave a heavy impact on an opponent.

How to Spin Hook Kick?

Spinning Hook Kick does take time to master. However, once learnt, it can help knockout an opponent even if you connect on their guard let alone their face. The spinning hook kick can be thrown from multiple stances; however, the body position differs in each stance. You can either use the hook kick for an attacking purpose or as a defensive counter attack maneuver. Regardless of your choice, here are general steps which you must follow while performing a hook kick:

Important Note: When wanting to land a spinning hook kick, it’s crucial to point your foot before the impact. Herein, we want to protect our Achilles tendon by compressing it. An ankle joint should be braced tightly by your muscles. Moreover, when lending a spinning hook kick, you want to connect with the bottom or the edge of your heel.

Importance of side stance in spinning hook kick

The stance as seen in fig. A is a neutral fighting stance. When you’re in neutral side stance, you need switch to an actual side stance before you throw the spinning hook kick. There are several ways to switch to the side stance: Stepping over, using your back foot to align it with your front foot to achieve side stance. However, the best version is to roll the non-kicking leg with the heels pointing towards your opponent. You can do so by lifting the toe and turning to the other side before using your kicking leg to deliver the blow.

When to use a spinning hook kick?

When you want create space in a tight space: Changing the lines incites an attack. By side stepping or jumping to the other side, you attract your opponent. When you switch lines, your opponent would naturally be inclined to attack your ribs. That’s a natural instinct as he would sense an opening. However, it’s you who are luring him into the attack so you can create space and land your own kick.

Intention to knock out: It’s no surprise that spinning hook kick is a great way to bamboozle your opponent. Especially, when you’re looking to knock him/her out. When you’re at a perfect distance, commit yourself and make sure you land the perfect kick and follow through. The key to knocking out your opponent with a spinning hook kick lies in working with the momentum and your placement. If you kick too early, you’ll misplace it, if you quick too late, your opponent will cover up the distance. Thus, find the perfect balance and then land your kick with the intention of knocking your opponent out.

Delivering Spinning Hook Kick requires to be completely committed since it requires you to follow through. When to deliver a spinning hook kick largely depends upon three factors:

These are the three common questions before you deliver a spinning hook kick.

Energy: First, since the movement is extensive it requires substantial amount of energy. Especially when your opponent is a little low on energy, you can take him/her by surprise with this kick.

Distance: Second, being at the right distance from your opponent is quintessential, as either short distance or too long a distance can hurt your chances of landing a spinning hook kick.

Intention: Third, since you’re accumulating the energy and would like to go for the spinning hook kick, make sure it’s worth it. After the initial rounds, the competitors require to pull out something special from their arsenal and spinning hook kick is certainly one of them. Deliver a Spinning Hook Kick to knock your opponent out.

What happens if you miss the spinning hook kick?

To deliver an accurate spinning hook kick, you need to measure your opponent. Don’t make it obvious but at the same time, don’t be too slow. With your peripheral vision, keep an eye on your opponent and land it with as much power as you can. Practitioner often misjudge the distance. It’s quintessential to get the distance right. If you fail to close the distance before landing the kick, one of three things might happen:

Remember to move a half step closer to your opponent than you generally are. The goal here is to not leave any space for your opponent to counter. Spinning kick is extremely good as a counter kick, however, you need to have sharp reflexes to read your opponent before you land one.

Common Mistakes to avoid while doing a spinning hook kick

Hip Flexibility Drills: To deliver a devastating spinning hook kick, you need your hip flexibility to be at its best. Since, the kicking involves elevation and its effectiveness largely depending upon it, you need your hips flexible to begin with. The flexible you are, the better elevation you’ll achieve with your kicks. To achieve flexible hips, you can start with drills such as splits using your knees. Figure four while grabbing your shin, deep horse stance to name a few.

Strengthening your hips: Apart from flexibility, strength is the most vital ingredient in your spinning hook kick. The flexibility drills mentioned above will help strengthen your hips and prepare them for this high-impact kick. Opening of hips is what strengthens it. If you follow the drills in the above guide by Alex Wong, it will help you tremendously in getting ready for the spinning hook kick.

Improve your balance: Since the spinning hook kick requires you to follow through, there’s a great possibility that you might lose your balance. To avoid this, try taking support of the wall, chair or any object which can help develop balance while kicking. Learn to hold it up in a chamber for a decent amount of time, try extending it as far as you can and follow through. The more you practice, the better you’ll become at maintaining the composure.

Improve your body posture: Keep in mind that you shouldn’t lean back sideways when throwing a spinning hook kick. Initially, you’ll face a lot of trouble in while trying to kick along with maintaining the posture. Thus, don’t get disheartened by it. Keep practicing.

Closing the distance: The best way to counter a spinning hook kick is by closing the distance as soon as you smell a kick coming your way. Consequently, you’ll be able to push your opponent into a difficult spot and you can counter with either a combination of punches or kicks, while he/she is trying to recover.

Defensive Push Kick: While the other two counters above are defensive in nature, this one’s an offensive counter attack. Herein, you attack your opponent when they try to land a spinning hook kick. This will help you push your opponent off balance and can lead to the same conclusions as closing the distance.

360-Degree Spinning Hook Kick: A 360-degree spinning hook kick looks sizzling but it’s the most advanced spinning hook kick. Herein, you don’t just kick in a particular direction, your turn a complete circle with your body before the impact. It’s a perfect blend of seamless hip movement and pivoting before you put your opponent to bed.

Difference between a Spinning Hook Kick and a Back Kick

Differencing these two kicks is not much of a task. However, if you’re just starting out, from a certain angle, you won’t be able to tell the difference in quick motion. Having that said, the difference is quite huge. Spinning Hook Kick involves a circular movement whereas back kick involves your feet in a linear motion. Spinning Hook Kick cannot be landed in a small space but back kick can be landed. Spinning Hook Kick is usually targeted to the head whereas back kick targets the ribs. The hip movement in spinning hook kick is more than in a back kick. Furthermore, the advance the version of the spinning hook kick, the more the movement of hips and pivoting.

As mentioned earlier, a Spinning Hook Kick is known by a wide variety of names such as Wheel Kick, Reverse Turning kick, Spinning Whip Kick or a Reverse Hook Kick.

The advent of footwork and movement combined with contemporary style makes the spinning house kick even more versatile. Strategic refinements, unique maneuvers and personal touch have helped variety of MMA fighters and sports personalities to make a name for themselves on the world stage. If you happen to know Edson Barbosa, you probably must have glide past this article in no time. He along with Mickey James (WWE) are well known for executing Spinning Hook Kick.

I hope this article kept you hooked and didn’t leave your head spinning (pun intended). The goal here was to present you with an all-inclusive guide to help improve the overall development and increase your knowledge about the spinning hook kick.

If you like to read such informative guides, and want to learn about more kicking techniques, choose from the topics below: