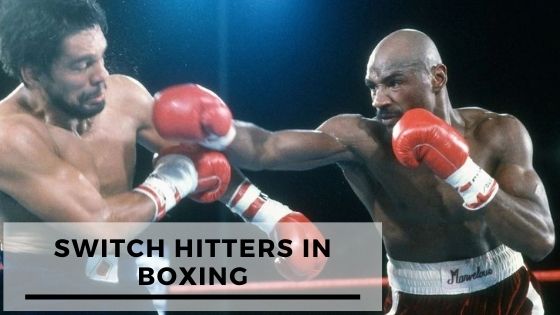 A boxing stance is basically how you position your upper body and your feet in a fight.

Over the years, there have been a lot of new stances incorporated into the sport, with the upright stance or the crouching stance.

But these new stances are generally still under the main 3.

We will briefly take a look at the first two, before primarily focusing on our topic for today.

The Orthodox stance is mainly used by right-handed boxers.

It is when the fighter’s lead hand is his weaker one, while the hand behind is his power hand .i.e you stand with your left hand and leg in front of you.

The Southpaw makes use of exactly the same analogy, but in this case, it is primarily used by a left-handed fighter.

You fight with your right hand and leg in front of you.

Given that we’ve talked briefly about Orthodox and southpaw stances, it becomes a much easier task to examine switch hitters.

A switch hitter is a fighter that combines both the Orthodox and southpaw fighting stances. I.e. he is able to switch comfortably between having his right hand in front, or his left.

As it requires a lot of skill, not many boxes can execute it, but the likes of Tyson Fury, Mike Tyson, Roy Jones Jr, and Terence Crawford have done so to really good effect.

Now that we know what Switch-hitting is all about, we can take a look at some of its advantages and also examine its perceived disadvantages.

Switching stances can have a positive effect both in an offensive and a defensive sense.

In an offensive sense, switch-hitting can cause a lot of confusion; this is because he doesn’t know which strike is coming next.

When fighting an Orthodox fighter, he’s primarily worried against the right hand and he’ll be able to defend better, but when a boxer switches stance, it gives an air of unpredictability which could throw the opponent off his/her game.

In a defensive sense, switch hitters are a lot more adaptable.

Take, for instance, an Orthodox boxer fighting another orthodox boxer, the moment one of them switches to southpaw, it takes away his opponent’s ability to jab with his left hand, this is because he can use his right lead hand to overpower his opponent’s weaker left hand.

One of the major disadvantages of this is that it is extremely difficult to do.

Also, it takes away the ability to strike heavily with your power hand, because the boxer is unable to generate the distance required.

If a right-handed person switches southpaw or vice versa.

Switching stances in a fight is a high risk, high reward move.

If it works, you can be almost unbeatable, but if it doesn’t, you leave yourself vulnerable in a fight because you could end up off-balance, as a result, a lot of boxing trainers advise against doing it.