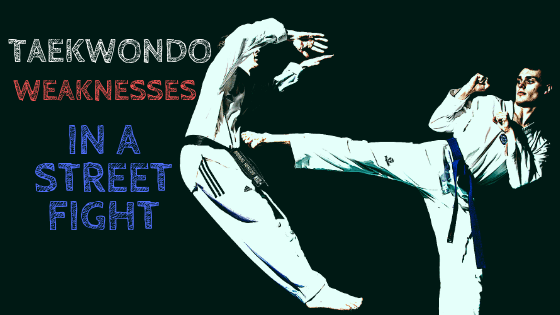 Self-defense at best is what Taekwondo is labelled as. But is it? Is this martial art capable of absorbing the fury of a Muay Thai fighter? Clinch of a wrestler and the ground game of a Jiu-Jitsu practitioner?

No martial art is perfect, and Taekwondo isn’t an exception.
Even if you’re a dedicated Taekwondo practitioner, you know that Taekwondo is not going to give you the greatest chance in a street fight. Moreover, a fair share of disappointment lies in its weakness against the other martial art forms.

Before you go out and bash me for my opinion; I would like you to know that I’m a Taekwondo enthusiast as well. Moreover, in this blog, not only will I point out the weakness but also share tips on how to overcome those weaknesses, so stick around.

1. Lack of Punching Abilities: Tae Kwon Do is referred to as “The way of kicking and punching”. Though these two elements are supposed to be the biggest strengths of Taekwondo, these qualities in this form of martial art are mediocre. Easy on the eye and spectacular from the stands, its impact as compared to other martial art forms is next to none.

The punches lack venom since speed overpowers the strength and impact. Apart from a few hand techniques and kicking abilities, there’s nothing in it to brag about. Especially when you’re in a close range duel, your lack of punching power can land you in trouble almost instantaneously.

2. Lack of Power in Kicks: Taekwondo is 70% kicking. For a martial art so heavily reliant on kicking, one must assume that the kicks might get the job done, but they don’t. Kicking in Taekwondo is highly emphasized on speed and explosiveness rather than power and impact (which knock the opponents out). For example, the most famous kick in Taekwondo is the roundhouse kick, but it leaves an extraordinary amount of space for an opponent to close-in.

Moreover, the moment the distance is closed, its lights out for the Taekwondo practitioner. Thus, in a street fight situation, if you land the kick, you’re lucky, but if you miss it, the game’s over. For instance, if you see the video below, herein, the instructor talks about how to effectively close down the distance and rain punches on a fighter heavily reliant on kicks.

3. Poor Ground Control: Taekwondo involves minimal to zero ground game. Hence, it’s without a surprise that you shouldn’t expect too much when taken down.

Imagine a Jiu-Jitsu fighter scoring a takedown, what do you think happens after that? Doesn’t the imagination scream nightmare? Let’s not consider a Jiu-Jitsu fighter or a wrestler, let’s imagine a kickboxer, even, in that case, the Taekwondo practitioner is most likely to get battered. Watch this video, wherein the fighter with Taekwondo background was left crying within the first 2 minutes.

4. Clinching Abilities: Taekwondo is not meant for a close distance duel. Yep, it’s effective if the contest was to take place on a football pitch, but a squared circle, street or a small area? The chances of escaping are pretty less.

Furthermore, a wrestler or a jiu-jitsu practitioner is in there to catch hold of you. As a taekwondo practitioner, you know that you’re most likely to maintain the distance. Why? Because your clinch is not up to the mark and the very approach is to defend.

Moreover, amidst your initial fury, if your opponent grabs you in a clinch, there’s not much you can do about it. Before you can evaluate the situation, you’ve already been smoothly transitioned into a submission.

5. Lack Overall Conditioning: Being a modern form of martial arts, Taekwondo is revered for speed and agility. However, when it comes to the overall bout, these two abilities seem lacklustre against several areas in the fight which includes power, strength, clinch, takedown and submission holds.

Since Taekwondo is lopsided in its approach, it lacks the overall conditioning required to stand tall against other martial arts.

6. Lack of weapon training: While not every martial art endorses the use of a weapon, there are many which have weaponry as its basis. Sadly, Taekwondo is not one of them.

Far from weapon training, it doesn’t even allow a punch to the face during sparring session (at least it yields no point). It’s soft and lacks edginess which makes the fighters incompetent in a street fight.

7. Show boarding: Perhaps the biggest drawback of this martial art. You’ll see the fighters with Taekwondo background flying all over the place trying to land the kick. What’s the result? They’re KO’ed into the ground within less than two minutes.

8. Exhaustive Timeframe: Due to its lengthy time frame, majority of the Taekwondo practitioner opt out before they even reach the Green Belt. The federation states that black belt comes with endurance and persistence that makes it more valuable, which I agree with.

9. Degrading quality: Taekwondo is more concerned with teaching how to use Taekwondo than how to fight using Taekwondo. Get the difference? There’s no fighting essence left in this martial art and has instinctively transformed into a cat-mouse point scoring sport.

Add the new rules to the mix, and the competition becomes mostly unwatchable. If you were to randomly sample a group of 10 BJJ, Muay Thai and MMA with TKD students, it wouldn’t take much time before you realise the ineffectiveness of Taekwondo and its limitless scope against other fighting styles.

10. Belief: Based on medieval Korean beliefs, Taekwondo believes that hands should only be used for greater purposes. Thus, feet are apt for self-defense. This misguided notion is what culminated into what Taekwondo is today.

Also a street fight requires agression and the intention to hurt, unfortunately taekwondo lacks this intention to hurt people during the fight, and we all know that’s not the mindset of a person during a brawl.

Taekwondo Vs Other Fighting Styles:

Wrestlers by virtue are better drilled in overall combat and are usually very good with the ground game and clinching. Apart from the kicking strength, there aren’t many areas where a Taekwondo practitioner can oust a wrestler. Especially when a wrestler is good at takedowns, using kicks isn’t a wise option. A missed kick can pretty seamlessly turn into a single or double leg takedown leaving no room to manoeuvre.

Striking analysts across the globe will tell you the difference between Taekwondo and Muay Thai. Taekwondo practitioners even if they manage to pull off an effective kick, end up leaving enormous room for a Muay Thai fighter to manoeuvre.

Jiu Jitsu is all about resilience and tiring down the opponent before you finishing them off with a submission. The ground and pound in Jiujitsu can sweat a Taekwondo black belt let alone a practitioner.

As a fighter with Taekwondo background, you have to take the risk of using your legs against the Jiujitsu practitioner, or else you’re risking a clinch, and that would make either transition into a takedown/punch or takedown/submission combination. In either case, don’t expect to walk out fine.

How to overcome the weaknesses in a street fight?

My intention in this blog isn’t to bash Taekwondo as a martial art; I love it too. The whole point of this blog was to identify the shortcomings and work towards improving those.

From my perspective, we can improve this martial art in numerous ways – We can start by changing the approach – improve our clinch and groundwork, emphasize on power and technique rather than speed and agility.

Improve our kicks, make them quicker and leave little room for the opponent to manoeuvre them. Focus on submissions and learn crucial holds which can help us cross the line in dire need. Finally, work on our punches.

There are only a handful of fighters from Taekwondo background shining in the MMA world – Cung Le. The most notable one (a combination of kickboxing and taekwondo).

Again, can’t completely accredit Taekwondo in his success. This outlook can be changed if we accept the changes and transition Taekwondo from a soft defensive sport to the offensive knockdown martial art.