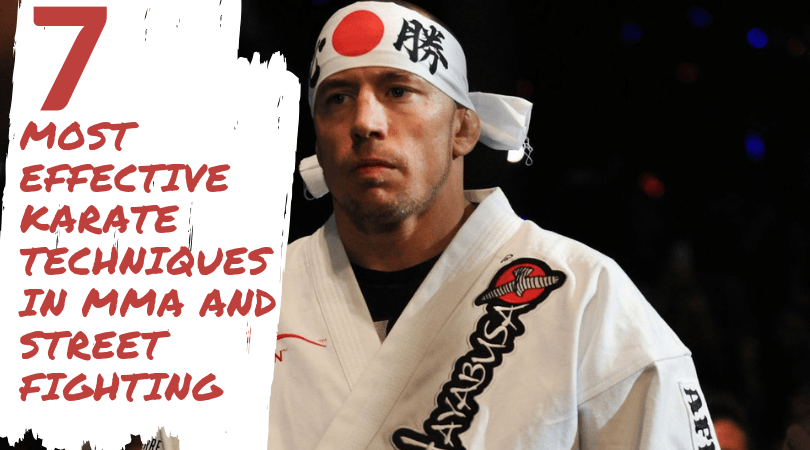 Nobody wants to learn Karate anymore, everybody wants to be the next Conor McGregor or whoever MMA champion they aspire to be. But what most people forget is that Karate and other traditional martial arts are the basis of modern MMA.

Personally I know a bunch of friends who have abandoned Karate classes for MMA or Muay Thai because, to them, Karate techniques and moves don’t work in a street fight and Kata is just a form of “fake fighting” choreography that you perform to pass belts and will never save you in street fights.

Today I am writing this article to prove to my friends and many Karate doubters out there that Karate has deadly techniques that have been proven to be extremely effective in MMA by great UFC fighters.

I am using MMA as a test instrument for Karate techniques because MMA is the closest available form of combat sports to a realistic street fight, therefore, whatever Karate technique works in MMA is automatically considered valid in a hand-to-hand combat or street fight.

In this article, we will be studying mostly former UFC champion Lyoto Machida, who is a pure Karate master in MMA. In his quest to capture the UFC light heavyweight title Lyoto Machida relied exclusively on Karate techniques to defeat a list of big names like Randy Couture, Rashad Evans, Bj Penn, Tito Ortiz and Dan Henderson.

In this Guide I have avoided the common techniques that Karate has with other martial arts like straight punches and the usual arsenal of kicks that most martial arts have. I have focused on the unique techniques and combinations that are almost exclusive or totally exclusive to Karate.

This combo is exclusive to Karate, it’s totally different from the combos of Muay Thai. This combo is composed of two basic techniques that you can find in every martial art, a roundhouse and a jab, but the combination and the execution of those two in karate are completely different than any martial art.
This Karate technique consists of throwing a Mawashi geri (Roundhouse) to the midsection of the opponent as a distraction then following with a Choku-zuki (Jab) with the lead hand to the chin. The jab doesn’t have to be full force, it can knock out the opponent easily if the jab is thrown with precision to the chin.

Loyoto Machida has captured the UFC title by using exactly the same technique/combo on Rashad evans knocking him don and then finishing him with punches on the ground.

Kuzushi Waza is a Karate technique not very known in MMA and other martial arts, it’s primarily exclusive to Karate. Kuzushi Waza consists of throwing a cross as if you want to reach the opponent jaw but instead you go with your hand to the side of his neck and then you step forward with your leg putting it right behind the opponent, this way, your opponent becomes trapped between your arm in front and your leg behind. After that all you have to do is drive through your opponent and he will automatically lose his balance and you will take him down effortlessly.

Ashi Barai (Foot sweep) is different than the kind of sweeps used in Muay Thai. In Karate the foot sweep uses the momentum of the opponent instead of using your own force which is the opposite of the Muay Thai sweep, where most of the times you have to clinch with the adversary and force him into a takedown with a sweep or catching their leg while they are throwing a roundhouse and then sweeping the other leg.

Ashi barai is one of the most essential techniques used in kata, 2/3 of Karate katas include this move.

Those of you who are familiar with the movie “The Karate Kid” will know this technique. Daniel, the bullied kid from the movie has used the same Mae tobi geri or crane kick to knock down his bully after being taught Karate by a martial arts master.
Daniel is not the only one who used the crane kick in a critical moment, Lyoto Machida used it too, except that he used it against UFC hall of famer Randy Couture, knocking him to the 10th dimension.

Daniel is not the only one who used the crane kick in a critical moment, Lyoto Machida used it too, except that he used it against UFC hall of famer Randy Couture, knocking him to the 10th dimension.

It is worth mentioning that Mae tobi geri/Crane kick is not completely exclusive to Karate, it exists also in Taekwondo under the name Twio ap chagi.

If you watch any World Karate Federation competitions you will notice that the fights are stopped whenever one of the competitors earns a point by striking their opponent. These rules are based on the philosophy of the deadly strike.
It is true that boxing is the ultimate art for all kinds of variations of punches, but Karate still adopts a unique style of punches based on a wide stance and a hidden counter punch coming from the waste and surprising the adversary while they are charging and fully committed to their attack.

Gyaku zuki and all the philosophy coming behind it is better explained by Lyoto Machida at his fight against Ryan Bader, which resulted in a devastating knockout of Bader.

#6: Fumikomi Geri (Side kick to the knee or stomp kick)

Fumikomi geri consists of stomping the opponent directly on their knee causing their knee to hyperextend and break eventually.

In MMA, no one has popularized this technique more than Jon Jones with his sidekicks and oblique kicks to the knee. Jon Jones used it heavily in his title defense against Rampage Jackson and caused his knee to hyperextend.

After the fight with Jon jones, Rampage protested this technique and considered it as a dirty technique which should be banned from MMA due to the critical damage it can cause.

The stance in Karate is very unique, it is the complete opposite of the Muay Thai stance. It consists of standing sideways, both feet on the same line.

Why is Karate stance sideways ?

As a martial art, Karate’s philosophy is mainly based on self defense, which means defending oneself comes always before attacking.
When the stance is sideways, it is easier to move back and forward to counter attack. The opposite of the sideways karate stance is the square stance used in Muay Thai. the square stance is mainly designed for attacking and standing your ground by blocking punches and kicks with your guard while the sideways stance is designed mainly on moving back and forward and making your opponent miss instead of blocking the strikes.
The sideways stance is more suitable for a street fight, simply because it is almost impossible to block the adversary’s punches since they are not using any big gloves.
In Muay Thai and boxing big gloves are used to block punches and make a barrier around the face, but in a realistic street fight, where dire consequences can happen if you get hit and knocked out, adopting a Karate stance and staying elusive and creating distance for kicks and countering with punches stays the best option in my opinion.

With this Karate stance, Lyoto Machida went very far in his career undefeated. This stance made Lyoto one of the fighters to receive the least amount of blows to the face in the UFC which allowed him to have a long career in MMA. Lyoto Machida is currently 41 years old and he is still fighting in big organizations, looking fresh and not showing signs of brain damage or CTE (Chronic traumatic encephalopathy) like other MMA fighters in his age.

Lastely, please notice that this article does not unvalue any other martial arts, this is simply an attempt to remind souls of the importance of karate and other traditional martial arts.
MMA is a very young sport (UFC had its first event in 1993). MMA is still evolving constantly. The days of winning MMA belts with only one martial art are gone, champions have to be multidimensional and have to incorporate new styles and techniques constantly.

And now, here is a list of MMA fighters with a Karate background:

28,612 thoughts on “The 7 Most Effective Karate Techniques in MMA and Street Fighting”