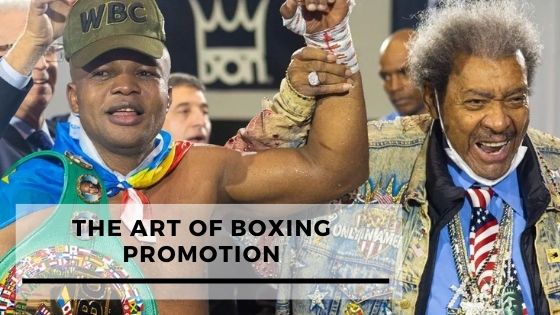 The role of promoters in the world of boxing cannot be overemphasized enough.

Without a doubt, boxing wouldn’t be at the level it is today without the efforts of people like:

Those are just a few of the promoters, past and present, that have played crucial roles in continually elevating the status of boxing.

Because of their apparent importance, it has become imperative for us to examine what it really takes to be a boxing promoter.

Who is a promoter and what does the person do?

A boxing promoter is primarily responsible for setting up and matchmaking fights between different opponents.

As simplistic as this role might seem, it carries within it a lot of other responsibilities.

They prepare budgets, raise the capital required for the event, and negotiate with managers, or boxers themselves.

Promote the events to the fans through various advertising agencies, find a suitable venue, liaise with Tv networks to broadcast the events, Et.al.

All these and more are some of the tasks that the promoter has to go through before each boxing event.

This is why they earn a big trunk of the revenue coming in because they tend to assume a lot of risks.

How do promoters make their money and how much do they earn?

Boxing promoters earn from a multitude of sources.

Former WBC light welterweight champion Ohara Davies revealed some of these sources in a YouTube video.

Ticket sales to the arena are a major source of income and PPV sales.

With a reported average of about $300 per ticket and some arenas filling close to 60,000 people, that brings in a lot of money.

Network broadcasters also pay money to show fights on their network, broadcasters like Sky Sports, ESPN, and DAZN are just a few of the top-ranked networks that show boxing fights.

There is also advertisement, many companies pay the promotions to advertise their products during matchups, either during commercial breaks or by putting the company name or logo on the boxing ring or ropes.

There are also other sources of income for promoters, like taking a share of the fighter’s purse, or fines for missing weight or any misdemeanour, but the above is the most comprehensive.

So, given that we know how promoters make their money, let’s talk about how much they actually earn.

Steps in becoming a promoter.

While it isn’t compulsory, wide knowledge of boxing and marketing strategies are fundamentals before you should think of becoming a promoter.

Once approval has been gotten, you can now officially begin to promote fights.

This is where you have to focus on things like; preparation of a budget, finding an adequate venue, purchasing ring equipment, scouting interesting fighters, recruiting staff, insurance and advertisement.

Contrary to a lot of beliefs around, boxing promotion entails a lot of hard work, sleepless nights and determination.

If careful thought and initiative aren’t put into the planning and execution of a boxing event.

It will be a disappointment for all parties involved including the promoters themselves.

To this effect, promoters have to be given a lot more respect than they already are due to the nature of the job.