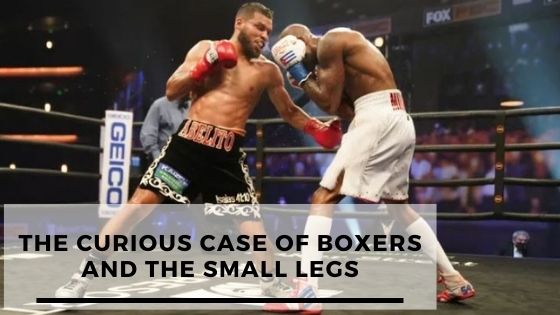 Boxers, generally, have smaller legs when compared to their upper bodies because they’re built differently.

And if you are curious as to why boxers have that unique build, then you can find out about it in this piece by reading on!

1. Do Boxers Have Small Legs?

Most professional boxers have huge and muscular upper bodies, however, their legs seem to be “smaller” than the other parts of their body.

This is what makes many people believe that boxers have small legs.

However, this is not true.

Boxers do have bigger leg muscles than the average person out there.

This should not be a big surprise as boxing requires athletes to jump many times and move around the ring for hours (even days).

Boxing also requires athletes to have strong legs so that they can generate enough power to hit their opponents.

This is one of the reasons why many boxers can look great with short shorts or trunks—they do have relatively big legs even if they appear to be smaller than the rest of their bodies.

It is true, however, that most boxers have relatively smaller legs when compared to their upper body.

This brings the question,

2. Why do they have relatively smaller legs than their upper body?

The amount of energy used in boxing is massive, in part due to the amount of running boxers do, but also because of the high number of punches thrown.

Boxing is a fast-paced sport, with fighters jumping around the ring and throwing punches from angles that may not have been anticipated by their opponent.

The agility required for this leaves at least a few seconds each round where boxers are moving and not punching (called passive time), meaning that there is a substantial energy cost to keep up with the pace and style of boxing.

This energy is burned through during fights, and boxers are generally known to be lean rather than muscular.

The actual source of this muscle thinness comes from the need for speed when hitting a moving target and an upright stance to the opponent’s body height.

Due to these factors, boxers tend to rely on quick jabs, straight punches, and hooks instead of slower, heavier shots such as uppercuts.

The quick movements involved in these punches all originate from the shoulders and core muscles, which are more efficient at generating force quickly than muscles in the legs.

Some boxers rely on upper body strength for power shots, so naturally, they will develop thicker legs for increased power if it suits their style.

However, most boxers prefer speed as it is generally more effective in taking down opponents.

3. Why do they still have powerful punches?

It is because boxers have a very solid core, which is heavy and dense.

Because of this, smaller legs are advantageous since they don’t weigh down the boxer’s body as much as big legs would.

It also makes their leg muscles faster since there is less meat on them.

This way a boxer can put more energy into his upper body for powerful punches.

In boxing, there are two things one must do to win — punch and move your legs.

Boxers tend to put more emphasis on their upper body because the arms and torso are what’s necessary for punching.

However, they keep their legs in the best shape possible to help them move easily.

Because if one is to be a complete boxer, one has to train all parts of his body.