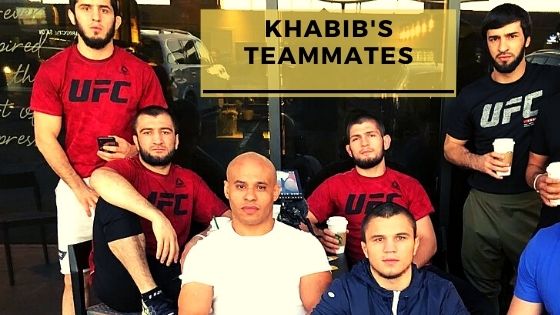 Although he is a member of AKA (American Kickboxing Academy) where he has a lot of great teammates such as Daniel Cormier, Cain Velasquez, and Luke Rockhold, Khabib has a smaller circle of teammates who grew up with him in Daghestan.

These close teammates/brothers are his real constant entourage, they accompany him wherever he goes and he knows very well that they have his back whenever he needs them .e.g. Conor-Khabib Brawl.

Here is the list of Khabib Nurmagomedov’s closest teammates:

There is another close teammate of Khabib who grew up with him and trained with him his whole life, Asadulla Emiragaev.

Asadulla Emiragaev is often called “older brother” by Khabib Nurmagomedov, he is not very present in Khabib’s photos but he had an essential role in the Conor-Khabib brawl.