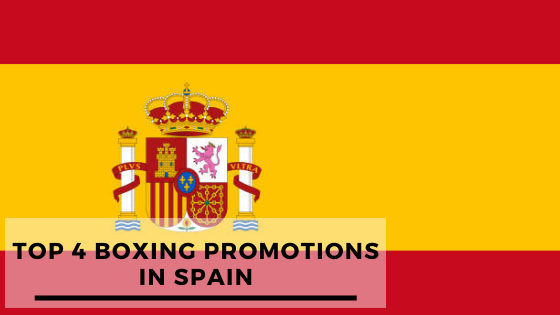 The topic of boxing in Spain has always been a controversial one; for a country blessed with athletes that always seem to excel phenomenally in sports.

The fact that she has had only 11 world boxing champions says something about a perceived lack of interest, especially in times past.

But recently, there has been a kind of resurgence in boxing, due to a lot of promotions coming up.

This is why we’re going to be looking at some of the biggest boxing promotions in Spain.

Established in 1978, the GPP is one of the oldest and biggest in Spain.

In addition to the fact that it acts as a promotion, it also acts as a gym and a boxing competition team.

The promotion also boasts some of the best and most promising fighters in the whole of Spain, with former champion Alejandro Moya in its ranks.

As well as other promising fighters like Ezequiel Gurria and Carlos Lamela.

You can purchase tickets to watch their fights by going to their website at www.gallergoprada.com/tickets.

MGZ is one of Spain’s most popular promotions, its regular event scheduling and exciting fighters have largely been a reason for its success.

The promotion has hosted over 30 boxing events since 2018 and continues to promote more, with 4 events already scheduled to hold in June alone.

It currently has young exciting fighters like Santi Vanegas and Ramadan Hiseni on its roster, and tickets for their fights can be gotten from the link in their Instagram bio.

Acting as more than just a promotion, the Asociacion Espanola de Boxeo cuts across all aspects of a boxer’s life and career.

From matchmaking to training, health services, management, and even ensuring that boxers can earn a living after retiring from the gruesome sport.

This dedication to the fighter’s career and wellbeing is why AEBOX is fast becoming Spain’s number one promotion.

They also host boxing podcasts and post newsletters on their website which adds to the allure of the company.

Last on our list of the top promotions in Spain is KO Boxing.

From relatively unknown status, it has risen to the upper echelon of boxing promotion within Spain due to its exciting matchmaking, and talented young fighters.

Some of the promotion’s best fighters include Fernando Jaquero, Juanfe Gomez and Jose Aguilar.

You can watch their fights live by purchasing a subscription on DAZN and tuning in at the scheduled date and time.

Given the enormous gap between Spain and other European countries with respect to boxing heritage.

There is still more work to be done, but promotions like the 4 listed above are definitely taking Spanish boxing in the right direction.