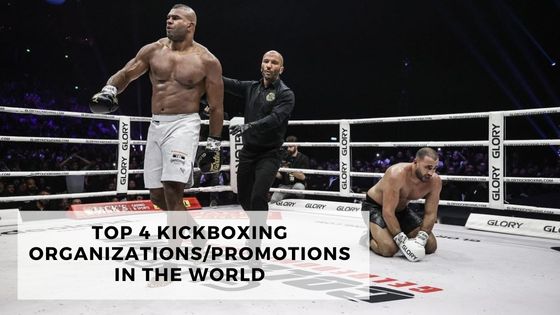 In this post, you will find a list of the top kickboxing and Muay Thai promotions and organizations in the world.

Right now, Glory has the best kickboxing roster hands down.

Also, fighters who are now UFC stars such as Israel Adesanya and Alex Pereira all fought under the GLORY banner.

Glory is owned by Pierre Andurand, a French businessman.

Glory is based in Singapore but has international offices in Denver, United States, and Amsterdam, Netherlands.

ONE Championship is mainly an MMA organization, but at the same time, they still organize kickboxing and muay Thai fights.

The idea behind doing muay Thai fights with MMA gloves is to offer more excitement to the fans.

Kunlun Fight is a kickboxing promotion based in Beijing, China.

Kunlun Fight is considered an elite organization, many kickboxing stars fought under its banner because of its high payments.

Also, Kunlun Fight is known for bringing rising talent from all over the world.

The promotion made its debut in 2014, each year it holds around 22 events.

You can watch all the events of KLF here on FITE.

ISKA is different from those big financial moguls like Glory and ONE Championships.

ISKA is based in the United States, it plays the role of a governing body for kickboxing, and it is also a promotion organizing kickboxing fights. The promotion is not known to pay big purses to its fighters.

In general, it is considered a B league where uprising talents showcase their skills, then once they are ready for stardom they get offered a contract by leagues that pay big purses such as Glory.