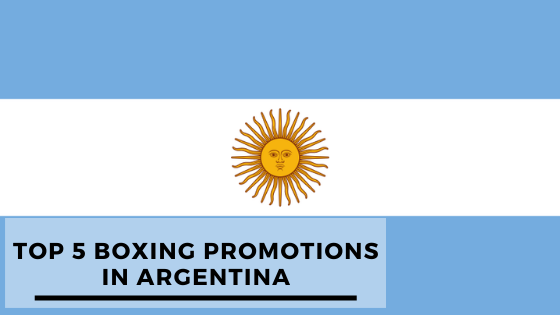 With a country as rich in boxing history as Argentina.

You would think that they would be included in a lot more boxing conversations with the likes of Mexico, of the United States, but for some reason, they always seem to go under the radar.

Well, not today, because we’re going to be looking at some of the biggest boxing promotional companies within Argentina.

The promotion is the biggest within Argentina; since its establishment, Maidana promotions has acted as a sort of revitalisation for a declining boxing system in Argentina.

Key to the promotion’s success has been its regular presence on social media, with the company posting exciting content on its Instagram account, and even going as far as uploading free fights on its YouTube channel.

Given the promotion’s growing popularity, you can watch their fights on ESPN knockout.

More commonly known as the Argentina Boxing Federation, it is one of the oldest boxing promotions and organisations, with 1920 being its year of establishment.

Having initially begun as an amateur boxing promotion, it has gone on to promote professional boxing events and fights for years.

Some of the promotion’s current fighters and champions include; Matthias Wheel, Ezekiel Fernandez and Celeste Alaniz.

The promotion also posts fight highlights and training routines of fighters on their Instagram and Facebook pages.

You can watch their fights live by getting a subscription on TyC Sports play.

Situated in Buenos Aires, and owned by Osvaldo Rivero, this promotion has stood the test of time to become one of the biggest in Argentina.

Established in 1989, OR promotions have held a remarkable 530 boxing events; to put this into context, the promotion holds over 16 events a year.

The promotion currently has exciting fighters like; Omar Narvaez, Gustavo Lemos and Erica Farias within its ranks.

Similar to OR promotions before it, Armano promotions has been existing since the 1980s; Initially starting as an amateur promotion, it has since gone on to promote professional fights.

In recent times, the promotion has gone on a bit of a streak, with 28 boxing events being hosted in just over 2 years.

You can watch its fights live through DirecTV Sports or DSport of DirecTV.

Last on our list is the ABP, one of the biggest boxing promotions in the whole of Latin America.

The promotion currently has one world boxing champion in Debora Dionicius, two Latin America champions in Luis Veron and Marcelo Coceres and one Argentine champion in Ezequiel Maderna within its ranks.

This quality of fighters is what has elevated the promotion to its current heights.

To watch these exciting fighters in action live, you can visit tycsports at the scheduled time of the event.

While Argentinian Boxing isn’t quite at the level it once was.

The above promotions are certainly acting as pioneers to restore the acclaim to one of boxing’s most reputable countries.