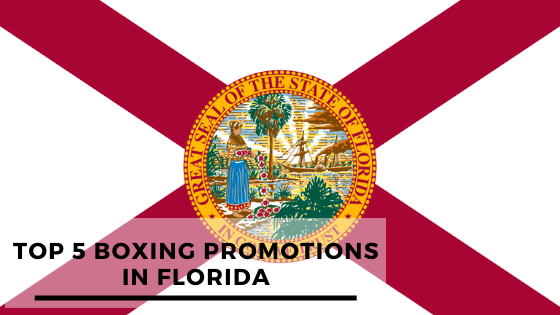 The City of Florida is home to some of the best beaches and resort centres on the planet.

Generally referred to as the Sunshine State, it’s known for its exotic beaches and a host of natural and tourist centres with a certain vibe of relaxation all around it.

But that isn’t all that this great city is known for, the city has produced a handful of great boxing legends like Roy Jones Jr and Keith Thurman.

So given the serene and somewhat otherworldly environment, with a background of famous boxing legends that came through there.

You can understand why Florida has a host of boxing promotions in it.

This is why we’re going to be looking at, and ranking the top boxing promotions among the lot in Florida.

Without a doubt, the biggest boxing promotion in Miami.

Created by Armando G. Hernandez just over a year ago,

the promotion has taken giant strides to become the apex promotion in Florida.

This is primarily due to the impeccable work by promoters, as well as a raft of quality boxers in their ranks.

To watch their fights, you can purchase tickets by clicking the link in their Instagram stories, or you could stream on FITE TV.

One of the very few promotions owned by a woman, and given the level of work that she has done, there should certainly be a lot more.

As the name implies, this promotion was created by boxing legend Christy Martin in 2017, following a long line of former boxers going on to create their promotions.

The promotion’s roster boasts a host of exciting and young fighters, all looking to make a name for themselves.

To watch their fights, you can purchase tickets for live events at eventbrite.com

In 2019, legendary boxing promoter Sampson Lewkowicz decided that it was time to get his own boxing promotional company, and he has done that to great effect.

From 2019 to date, the promotion has held over 50 boxing events in Florida.

While being responsible for the breaking through of potentially world-class boxers.

You can watch live events by tuning in to TyCsports at the allotted time and date of the event.

Situated in Miami, south Florida, M & R was established in 2019 with the aim of giving young, talented athletes a chance and a platform to showcase their skills.

And given that the promotion has hosted over 20 events since its inception, it has done exactly that.

You can purchase tickets to watch their fights by going to their website at www.mnr-lc-boxpromo.com.

Coming in last on our list is the WBP; situated mainly in  Fort Lauderdale, Florida, the promotion has hosted over 30 events spanning 6 years.

Given the length of its operations, you could be forgiven for questioning why it isn’t at the top of the list.

But regardless, it’s still one of the very top promotions in Florida with top fighters like Vitaliy Kopylenko and Vadim Musaev present within their ranks.

You can watch their fights by purchasing tickets from https://tickets.completeticketsolutions.com or by streaming it live using Fite TV.

So, that’s where we leave it for now; you should know that there are still other exciting boxing promotions in the sunshine state.

But if you’re looking for the very best, the above 5 are certainly your best bet.