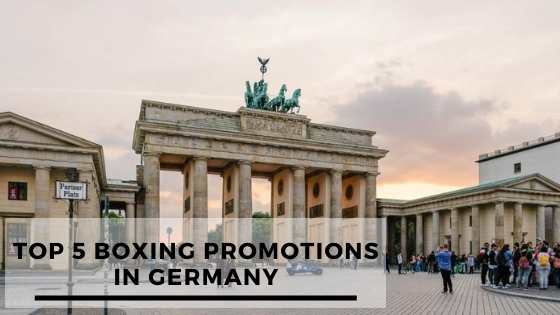 One can argue that Germany has had a topsy-turvy relationship with boxing since the 1930s.

While in the past, there had been a lot of boxing champions from Germany the likes of Max Schmelling and Frank Klaus.

In recent times, the level has certainly dropped with only a handful of Germans getting to boxing’s very top.

Nevertheless, there exists real talent within Germany and just the right amount of exposure could act as a catalyst.

Which is why we’re going to be looking at some of the biggest boxing promotions within Germany;

The Universum Box promotion has gone through a series of highs and lows since its establishment in 1984.

In its initial years, the promotion was home to some of the best boxers, not only in Germany but in the entire world.

The Klitschko brothers, Vitali and Wladimir both made their names from this promotion, as well as the first German professional boxing champion in Regina Halmich.

While bankruptcy might have led to its initial demise in 2012, the promotion is still the biggest to ever come out of Germany.

Petkos is arguably the most entertaining promotion on this list; unlike the others, it aims to combine entertainment and music with its boxing events.

Some of the promotion’s best fighters include Shefat Isufi, Menal Topcu and Edin Avdic.

And you can watch their events by purchasing tickets from www.petkosbeatandbox.de

Established in 2000 by a man named Ulf Stainforth, SES Boxing has been on a meteoric rise.

In about 22 years, the promotion has hosted over 150 boxing events, with the various world and regional champions coming from this promotion.

Robert Stieglitz, Dominic Bösel and Jan Zaveck are just a few of the fighters that have held world championships while fighting under this promotion’s name.

The promotion also posts exciting content about fighters on its Instagram page, as well as information on what channel you can watch its fights live from.

Situated in Berlin, Germany, the GBA has become one of the biggest in the region.

The promotion currently has the most amount of boxers within its roster in Germany with the total number surpassing 200.

This large number means that there will be more events, and this is further proved right by the fact that the promotion has hosted a remarkable 98 boxing events since September 2019.

You can watch their fights live by joining the promotion’s live stream on its Facebook page.

Otherwise known as the Association of German professional Boxers, this promotion was established in 1949, primarily to act as an “umbrella” for professional boxers within Germany.

Over the years, the BDB has gone through a series of controversies, from disagreement among the board to doping and cheating allegations.

But regardless, it still has a respectable following in Germany and some parts of Europe.

It currently has talented fighters like; Peter Kadiru, Michael Eifert and Dimitar Tilev within its ranks.

Regardless of the recent decline of boxing in Germany, there exists a lot of potential and hope for a new generation to dominate the boxing world like in the past.

And given the works of the promotions above, that day is seemingly coming sooner, rather than later.