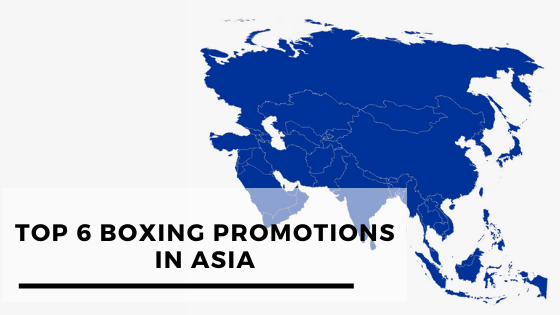 Asia has always been one of the most important continents in boxing.

Some of the greatest boxers in history have come from Asia, including Manny Pacquiao, Chris “The Dragon” John, and Gabriel “Flash” Elorde.

Asia has no shortage of boxing organizations.

This article will list the six best boxing organizations in Asia:

Let’s see how these organizations stack up against each other.

If you’re looking for one of the biggest and most active boxing organizations in Asia, look no further than Cocky Buffalo.

This promotion has been putting on some of the best boxing events in Asia for years in Vietnam.

They showcase various videos, including highlights from their previous events, training footage of their fighters, and more.

Along with that, they also have a strong YouTube presence (over 8,000 subscribers).

Their aim is to produce a boxing world champion from Vietnam.

Thus, they focus on finding and developing young boxing talent in the country.

Tukeshov Promotions is a Kazakhstan organization that was founded in 2018.

It is one of the leading boxing promoters in Central Asia.

The company has promoted some of the biggest boxing events in Kazakhstan.

Their most recent event was the “Tukeshov Boxing Event XVI,” which featured a title fight between Nurymbetov and Ertanov.

They have a strong Instagram following with over 49,000 followers.

Sanman Productions is a Philippine-based organization that has been promoting boxing events since 2007 by JC Manangquil.

This promotion has some of the most experienced staff in all of Asia.

The gym located in General Santos City is where a lot of up-and-coming boxing talent in the Philippines train.

Randy Petalcorin, who is the WBA interim world light-flyweight titlist, is one of the big names that train at this gym.

Manangquil has done a good job of boasting a strong social media presence too.

Fans can find complete fight videos along with training footage and other content related to boxing on their YouTube channel.

Elorde International is a boxing organization also based in the Philippines.

It uses Facebook to broadcast its events live to over 6,300 followers.

The company was founded by the family of the late world champion boxer Gabriel “Flash” Elorde.

This organization puts on annual boxing tournaments in his honour.

Recently, they have started putting on more events to help encourage the local talent in the Philippines.

The Southeast Asia Fighting Championship is a new organization that was founded around 2016. It is based in Bangkok, Thailand.

This organization has been working with various promoters in the region to help grow the sport of boxing.

Apart from boxing, they also showcase other martial arts such as MMA, Muay Thai, and kickboxing.

You can find full fights from their previous events, fighter interviews, and more on their channel.

They also have a growing Instagram follower count, which currently stands at over 1,300 followers. Furthermore, their Facebook page has over 3,400 followers.

The Japan Boxing Commission is the oldest boxing organization in Asia.

This organization is responsible for regulating and overseeing all boxing events that take place in Japan.

The first commissioner was Munehide Tanabe, who served until 1966.

The current president is Masahiko Harada, who was a former world boxing champion in the flyweight and bantamweight divisions.

They lack any social media presence.

However, they have been organizing the greatest events in Japanese boxing for over 60 years.