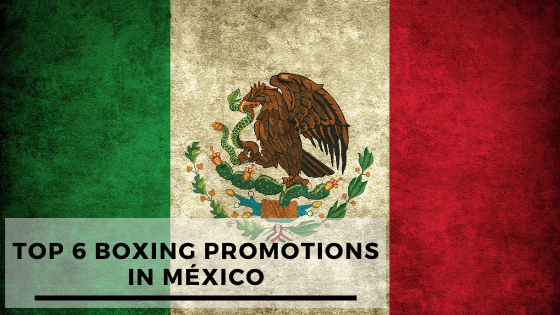 Like how a duck takes to water, so is the same way Mexicans take to combat sports.

Since the 18th century when boxing was illegal in most countries, it was a booming sport in parts of Mexico and this led to one of the first-ever boxing commissions to ever exist in 1921.

Ever since more and more boxing promotions have been established and this has led to the country producing over 200 world champions.

So today, we’re going to be looking at and ranking some of the biggest boxing promotions within Mexico.

Established in 2016, Zanfer promotions has become the biggest in the whole of Mexico and Latin America, with a social media presence of over 200,000 followers.

In fact, it was recognised as the best promotional company in 2017 by the WBC in an award ceremony hosted in Mexico, with a host of the promotion’s fighters also picking up individual awards too.

The key to Zanfer’s success in the promotional world is the raft of boxing talent within their ranks, and when you back this up with incredible matchmaking and an ever-growing and improving social media presence, you are bound to have a ton of success.

Some of the best fighters in the promotion include; Emmanuel Navarrete, Anabel Ortiz and Mauricio Lara, all of whom have previously held boxing championships.

To  watch the promotion’s fights, you can purchase tickets from Zanferboxing.com, or from www.Arema.com.nx

Barely 4 years since its inception, Sports Production, more popularly known as Producciones Deportivas has become one of the first names for boxing promotion in Mexico.

Although still growing, the promotion has done a good job of creating and posting exciting content on its social media pages, with highlights of knockouts and fights being shown on its YouTube channel.

Some of the promotion’s best and most exciting fighters include Diego Carmona, Juan Alejo, and Cristian Gonzalez.

If you want to watch their fights, you can purchase tickets from www.pdeportivas.com or you can stream the fights live by visiting www.estrellatv.com at the scheduled time.

Established in December 2019 and situated in Tamaulipas, the promotion has undertaken huge strides in such a short time.

In just over a year, the promotion has hosted over 15 boxing events with over 100 boxing matchups situating in an extraordinary average of about 1 event per month for over a year.

This extreme dedication to the promotion is why it’s regarded as one of the best and fastest growing within Mexico.

Some of the promotion’s best fighters include Leopoldo Reyna, Amilca Vidal and Armando Gonzalez.

To get tickets to watch their fights, you can call 8682277956 or you can visit their Facebook page where you can get the venue for the live event.

Bx stars have had a huge ton of success in Mexico, especially when you consider that it has only been around for just a couple of years.

The promotion has done a phenomenal job by promoting young, hungry and talented fighters, in the likes of Raymundo Rojas, Alberto Mora, and Adrian Curiel.

You can follow their fights live by subscribing to the ESPN Knockout channel at the scheduled time and date.

Situated in Tijuana, Mexico, Jibaros boxing has been responsible for promoting somewhat underground Mexican fighters for the better part of 5 years.

Although the promotion started slowly, it seems to have found its own in recent times; especially if you consider that it has held 21 boxing events since January 2020.

The numbers don’t lie, and it’s clear if they continue in this manner, they’ll be in contention for the biggest in Mexico in no time.

Michael Rocco, Ali Cortez, and Isaacs Lucero are just but a few of the young exciting fighters within the promotion’s ranks.

With events coming in quick and fast, you can watch the promotion’s fight by streaming it live through their Facebook page, or by visiting Evolution Sports bar, Tijuana.

Rounding up our list of the biggest promotions in Mexico is Makina boxing promotions.

The promotion might have a limited global appeal as of right now, but within Mexico and some Latin related States, it is one of the go-to for high octane boxing matchups.

With 9 events since 2021, and 3 already this year, the promotion is beginning to gain more traction in the boxing world.

And with exciting fighters like WBO number 15 ranked lightweight Jesus Saracho and young prospect Jose Antonio Sampedro within the promotion’s roster, such popularity is likely to increase within the coming years.

To purchase tickets to watch their fights live, visit rayfryeboxing.com, or you can join their Facebook livestream at the time of each scheduled fight.

So this is where we wrap it up for today.

Given the fact that Mexico has been responsible for producing a host of boxing greats like Canelo Alvarez or Julio Cesar Chavez to name a few, you can be certain that a future great is on the horizon in Mexico.

And if you want to follow that person’s meteoric rise from somewhat unknown status, to global acclaim, then the above 6 promotions are definitely your best bet.