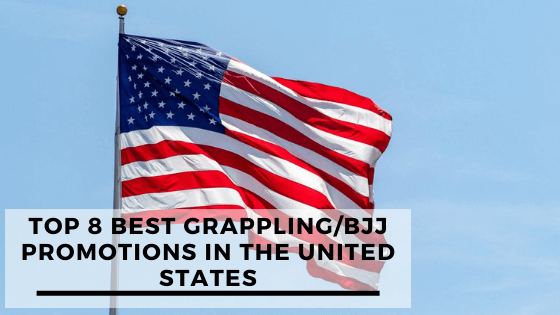 BJJ has fascinated the US audience ever since the early days of the UFC.

The first few UFC events were dominated by Brazilian fighters using grappling techniques that American audiences had never seen before.

In the years since grappling and BJJ have only grown in popularity in the US.

There are now dozens of Grappling/BJJ organizations operating in the United States.

This blog will list 8 of the best Grappling/BJJ organizations in the United States.

We will not include international organizations like the ADCC and IBJJF as they are not based in the US.

Without further ado, let’s get started!

Based in Texas, FloGrappling is one of the US’s most popular and well-respected Grappling/BJJ organizations.

It is part of FloSports, a sports media company that also owns FloWrestling (a wrestling media platform) and FloGrappling Europe (a grappling organization based in the UK).

That has helped them reach over 318K YouTube subscribers.

Their social media presence stands at:

Fight 2 Win Promotion is based out of Denver, Colorado.

Their premise is simple. They bring together the best grapplers in the world and let them fight while offering a high production value show.

Their events are always packed with exciting matches, high-level grapplers, and a rowdy crowd.

That has helped them build a strong following and grow into one of the US’s most popular Grappling/BJJ promotions.

Their social media following is mentioned below:

Submission Underground has been around for over 5 years.

It was formed by former UFC fighter Chael Sonnen.

He aimed to create a promotion that would bring together the best MMA fighters and the best BJJ fighters in the world and let them compete under EBI rules.

Submission Underground has held 29 events to date and shows no signs of slowing down.

They hold their events in an undisclosed location with no crowd.

That said, their popularity has been steadily growing with the following social media followers:

The original invitational introduced no-gi and submission only rules.

It is an action-packed tournament that features some of the best no-gi grapplers in the world.

The Eddie Bravo Invitational has been running for over 6 years and has been the basis for ‘Combat Jui-Jitsu.’

The exciting platform has gained quite a social media following too.

The Third Coats Grappling Championship is based in Texas and had its first event in January 2019.

They focus highly on promoting local talent and have a large range of grappling divisions.

Their social media following is still growing but stands at:

Rogue Promotions 541 is based out of Oregon.

They are primarily an event-promoting company that has dabbled into grappling championships.

Their first event was the Arena Wars: Redemption, held in April 2016.

Since then, they have gone on to host several kickboxing, MMA, and grappling matches.

It is based out of New England and features some of the top competitors from across the country.

The Top Level Pro series has been running for almost a year and the 6th event is scheduled for June 25th, 2022.

Their social media following stands at:

Ground Force Fights is based out of New York and allows the local talent to rise to the ranks.

They have a wide range of divisions for both gi and no-gi matches.

Furthermore, they also feature kickboxing and MMA fights on their cards.

Their social media is still growing but stands at:

So there you have it! Those are 8 of the best grappling/BJJ promotions in the United States.

Which one is your favourite?