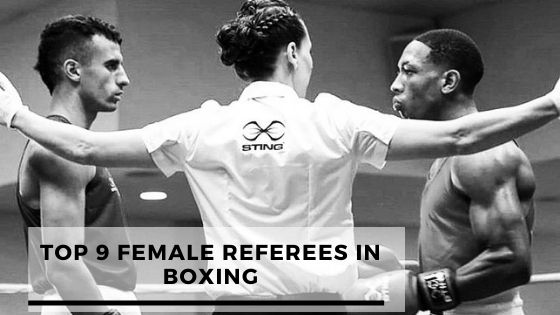 Undeniably boxing referees or judges may be a miserable job since many officiating are constantly chastised.

Poor refereeing, on the other hand, affects and terminates existence in the worst of conditions.

We have not had an in-ring fatality in any leading pro boxing organization.

All of the incidents occurred during lesser events or in unofficial fights.

Yet, every time a referee enters the ring with improper knowledge about performing their tasks, livelihoods are put in harm’s way.

The Referee ought to be completely conversant with the Boxing regulations.

Furthermore, a Referee’s primary responsibilities are to properly stick to the rules, retain ownership of the fight, and evaluate the regulations as they apply to the event.

This article will feature about top 9 female boxing referees and their professional set of services in the ring. So, Let’s Begin!

She has served as a referee in different international boxing events.

She was also one of the referees for the boxing events at the 2020 Summer Olympics by the International Olympic Committee.

She was considered a forerunner of women’s boxing in Sri Lanka when it first launched in the 2000s.

Belle Martell’s reign as boxing ring queen was as brief as a knockdown sequence, but she accomplished it graciously.

Martell, the first woman in California to be allowed to referee boxing fights, learned the game in the 1930s by observing her spouse coach boxers.

She was another ring announcer, completer finisher, and professional combat organizer.

She handles the game from within as an Olympics Boxing Referee with AIBA International Boxing Organization.

Jennifer is the President and Owner of the Battle To Cure Leukemia and it being a Canadian State Coach at her gymnasium.

She is very committed to society, but she still finds time to explore the globe and show with a Top Class Illusionist.

Qualified Custom Broker with a documented proven ability to work in the procurement and supply chain business is also a talented referee in the background of female boxing and has shown his talents as an honest referee.

The first CSAC female referee since Gwen Adair, Sharon Sands, did it back in the 90s.

Did you know she was an attorney and owned her boxing gym in Las Vegas?

Phumeza Zinakile always was a touch sketchy as a little girl growing up in Kwelerha town and Mdantsane, East London.

She was usually on the soccer pitch with males or starting fights rather than combing Barbie dolls and playing with makeup and fingernail lacquer.

Her proposal comes at an ideal moment, as the nation observes Women’s Week.

Zinakile, who received the BSA’s 2017 female ring official award in January for her hard graft, devotion, and enthusiasm, stated her basic takeaway this year has been to her female colleagues.

Sparkle Lee entered the arena for her first amateur fight over 20 years ago under a shroud of pressure.

Lee did not have the appearance of a traditional boxing referee as the “third guy in the ring.”

Lee found herself positioned among two crazy male welterweights who failed to listen to her directions after waiting over a century for the chance.

She liked the game and hoped to keep engaged, so she started her quest to become a referee, a profession that men in New York City exclusively occupy.

Lee was considered for significant professional series tournaments throughout the 1980s and early 1990s. She remained patient and never contemplated giving up.

Wine Tshidibi, the first female professional boxing referee in the Republic Of Congo, credits her success to a “fit of envy.”

It was a chance for the 40-year-old mother of four to keep a close eye on her spouse, says the woman who formerly performed the “noble art” but now regards it as an exclusively masculine activity.

Tshidibi, who is obstinate and has a large build, began boxing after trying out for other games like volleyball, tennis, and karate, but she easily admits that envy drove her into the circle in 2002.

“Every time he completed one of his boxing contests, he moved off with other ladies,” she laughs.

Contrary to common attitudes that discourage women from sports participation, such as boxing, Makumbe has smashed through the glass ceiling, becoming one of Zimbabwe’s most notable boxing referees.

After a great 15-year boxing career, the reigning bantamweight national champion advanced to becoming a referee and judge.

Although being seen as a masculine sport, owing to its fighting character, boxing has no ethnicity.