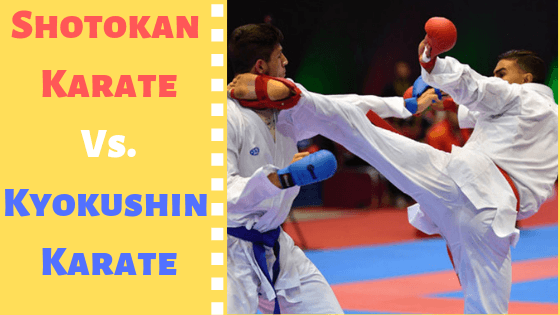 To most of my students, Karate is karate. So when others ask, what’s the difference between Kyokushin karate and Shotokan karate, this question draws up a blank on their minds.

But all that’s about to change now. In this article, we’ll be going deep into not only knowing what those two karate styles are, but also the features that make them distinctly different. Are you with us? Good.

This style of karate deals with full body contact. Full body contact means you can go all out, run over your opponent like a bull if the situation warrants it.

Can you actually do that, you ask? No! That was just to tell you how much body contact you can make.

Full contact means throwing powerful combos of attack on your opponent until you overpower them and until you ultimately knock them down.

In this style of karate, the fighters make use of different kicks and knees to hit different parts of the body to score points.

This technique that is much celebrated and enforced in Kyokushin karate is what is frowned and banned in Shotokan karate.

This video shows a highlight reel of Kyokushin karate fights

This style of karate deals more with points. It follows the point fighting principle. But most importantly, it takes into account the weight of the punch.

Thus basically means that you’re allowed to hit your opponents in specific places with specific strikes to score points, but if you hit them harder than necessary you lose point. Sounds harsh, right?

Once a strike is made, be it a punch or a kick, the fight is stopped by the officials and they look into the strike, to decide whether the strike was right and if it packed just the necessary punch, before they can award points for it. Don’t worry we’ll be going deeper into this as the article progresses.

This video shows a highlight reel of shotokan karate fights

Let’s start with contact. Both styles are different on a contact level. Kyokushin karate believes more in full body contact, this ranges from medium to hard contact during sparring to full contact during competition. This means your entire opponent’s body is a target except for their head.

Shotokan karate on the other hand is basically light contact or controlled contact. After every hit or strike, the game is stopped or paused to check whether the strike is successful or not.

Shotokan karate scores with a clean and direct strike. As it is a points game, they gain scores from every strike and the game is ended when a successful technique has been made. Kyokushin karate on the other hand gains score from effectively putting their opponents away. You got that right, a successful KO or KD (Knocked Down) is what is needed.

Shotokan karate tends to focus more on Katas than on sparring, hence their scoring. Kyokushin karate, you’d have guessed by now, focuses on sparring more than Katas.

Which Style Is Safer?

Shotokan karate style deals more with the technique of the point delivered than the force of the punch delivered. It is therefore safer in terms of that, because Kyokushin karate style enforces harder strikes to knock out opponents.

Kids and beginners prefer this as they do not get injured unnecessarily.

Which style is more suited for self-defense situations?

Here we’ll have to go with Kyokushin karate. Why? Well, let’s take the Shotokan karate style for example, a burglar that attacks you, isn’t there to attack you for points, he’s attacking you to put you down or incapacitate you.

You don’t expect an official to come and separate the fight after every strike, Kyokushin karate on the other hand deals with putting him down once and for all.

Kyokushin karate can be applied in MMA, kickboxing, etc. There is more emphasis on dealing as much damage as possible to bring your opponent down.

Now that you know the styles and their differences, there’s only one thing left.   OSU!!!