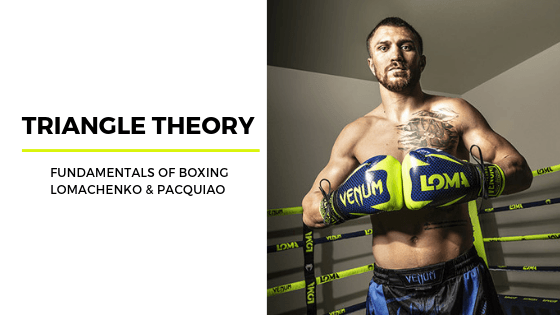 Let’s begin this blog by distinguishing the two types of triangle theories. The first triangle theory is a misconception not just among casual boxing fans but also the ones who are deep into the sport. Fun fact, it’s not just related to boxing; it applies in every other sport hypothetically. A principle which suggests, that if A beat B and B beat C, then A can automatically beat C. As ludicrous as it sounds, that’s what certain fans believe.

With that theory out of the bag, we are here to discuss something more significant; we’re here to study and analyze the technical boxing triangle theory wherein you get into an advantageous position by creating space for yourself.

So, what’s a Triangle Theory in Boxing?

It’s a boxing theory which explains the advantageous position that a fighter can create for himself when he attacks his opponent from a 45-degree angle. In other words, it’s what most people refer to as the outside angle. This is the foundational theory as to why slipping a punch and countering from a certain angle is so effective. 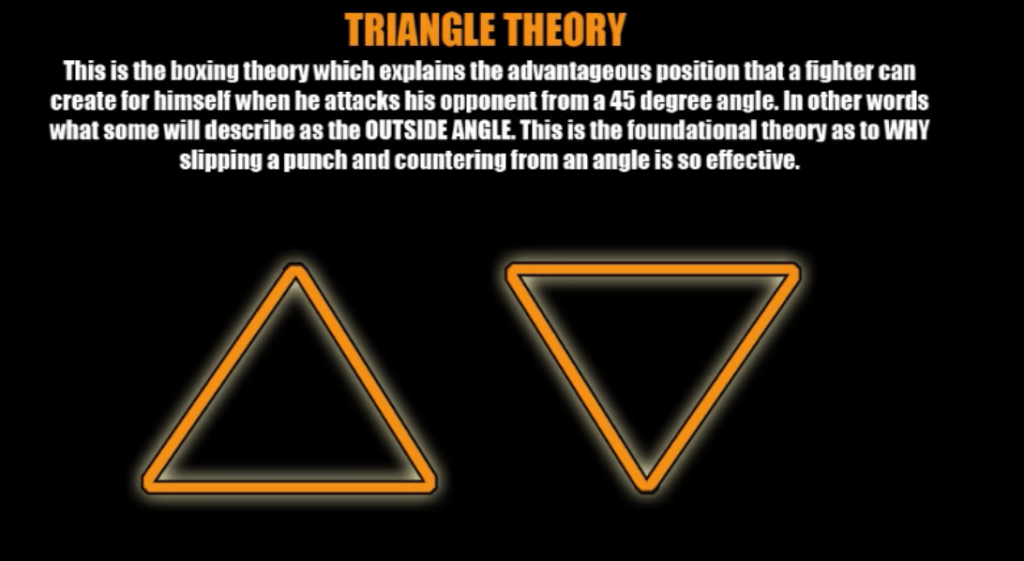 Before we even move forward; it’s important to understand that, this is not something that the fighters are thinking about whilst they are in the ring. This ability is instinctive based on practice. With that said, let us look at the setup.

Theoretically, there are hex theories, diamond theories along with triangle theory along with many other shape and positional theories. As you can see in the image below, the boxers are facing each other in an inverted triangle. While doing so, they are part of a triangle.

Herein, they place themselves on any of the three points in the triangle. In the image below, you can see the red boxer placed on the bottom point.

Like a fighter who’s applying the triangle theory, you must be at either of the three corners with your opponent in the middle. From this point, you must realize that there are no advantages. Though you’re placed at a point, your opponent still has access to the same punches and techniques. 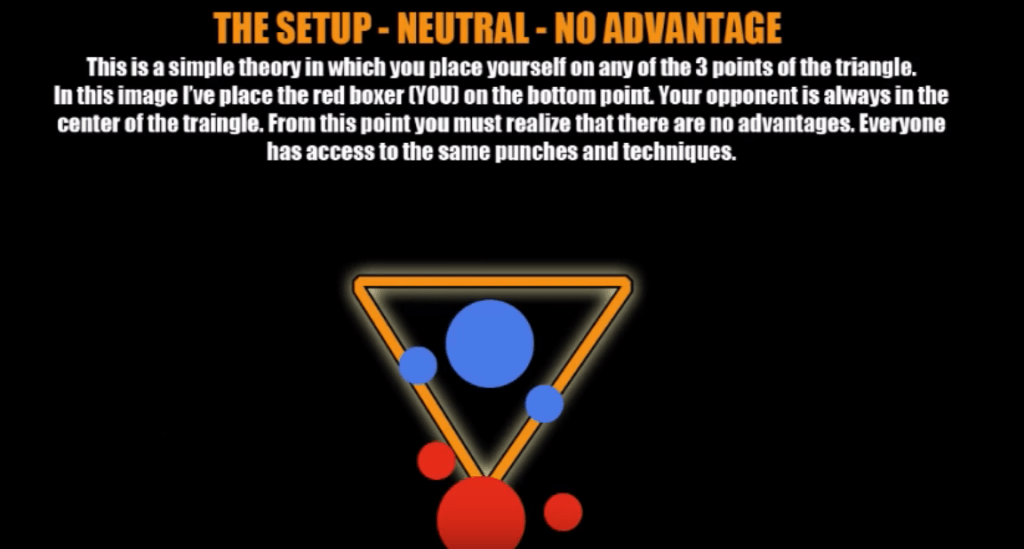 Because if you were to flip the triangle, the exact same thing would happen. You can see that flipping the triangle gives you the exact effect for the blue boxer. Every boxer establishes his own triangle, at which he stands on any of the 3 points with his opponent at the centre. 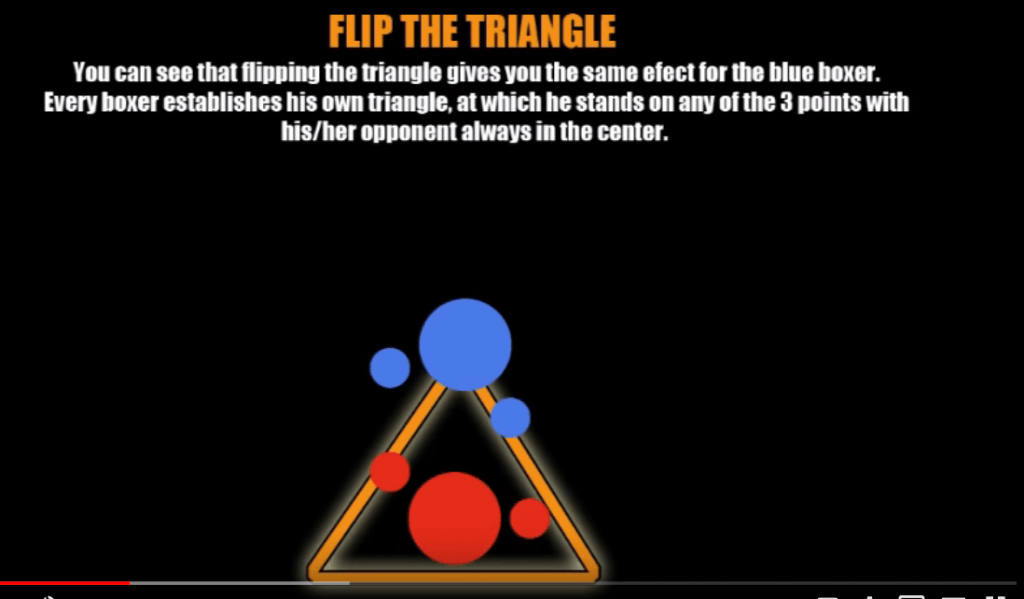 Now, so far, you might have seen nothing instrumental. You must be thinking, what am I even talking about? It’s so basic. Just an equilateral triangle wherein boxers place themselves. What’s so cool about that?

Well, this position acts as a basis of understanding range. Once, you learn how to work the triangles; you get better at countering and slipping punches. However, that’s not the most beneficial point. The most impactful point is the one below.

Using the Outside angle to gain an advantage over an opponent

Once, you start moving along any of the sides on the triangle, provided your opponent remains in the centre of the triangle, you will always have the upper hand. Attacking your opponent from an angle which is out of his direct line of vision provides you with considerable advantage. We’ve seen how boxers like Lomachenko and Pacquaio use the triangle theory to great effect.

Lomachenko, as we learned in one of the case studies, is a master at deceiving opponents through movements and attacking them from angles which aren’t in their direct line of vision thereby successfully catching them most of the times. Now it’s not just the unexpected move but also the freedom to punch with both hands. By moving away from your opponent, you simply create angles to strike from any angle. For instance, you can slip a jab, step out or even counter right hand.

Now an interesting part is, triangle theory works wonder for a boxer who are counter punchers. Why? Because it functions only when your opponent is throwing punches at you. If your opponent isn’t throwing punches at you and you’re the one doing it, then there’s an opposite effect, where they are using the triangle theory against you. Understood? Similar to the flipping of triangles that we saw above.

What you see in the diagram below, is a guy in blue trying to shoot a jab and the guy in red slips the jab and steps along the sides of the triangle. Now the image below shows him moving to the right, but you can go anywhere you want. 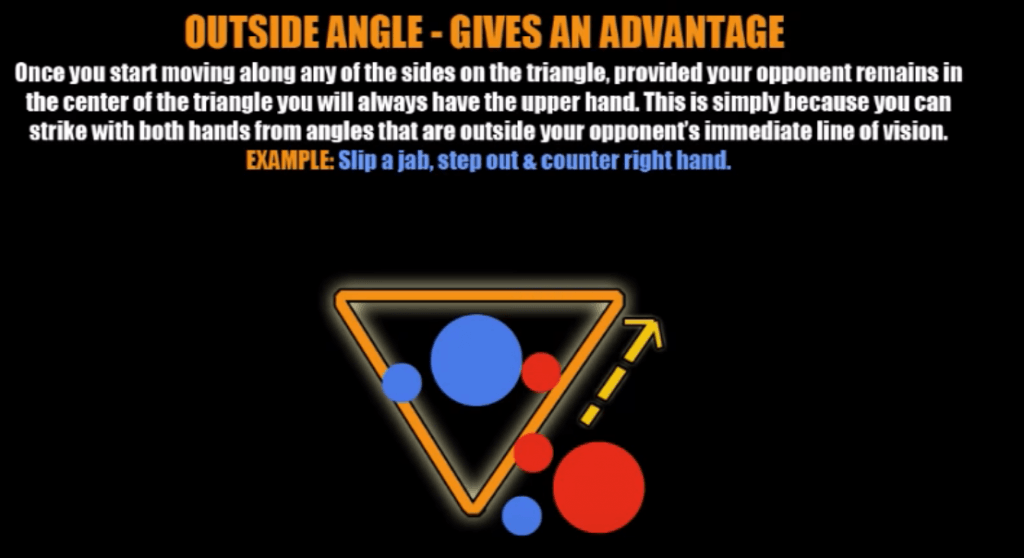 One thing I do want to stress before we move forward is that this is a fundamental theory. No boxer stepping in the ring will thing about working with the equilateral triangles. This is just a scientific study which explains the art of establishing angles in boxing. When I mean scientific, I’m referring to the science of boxing.

Through triangle theory, it’s easy for you to conceptualize the creation of angles in boxing. 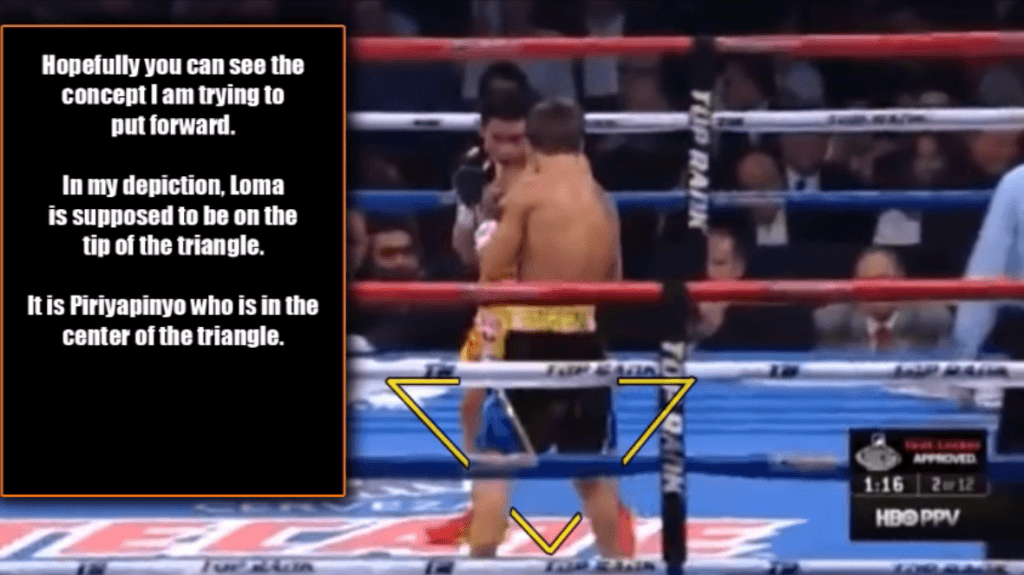 Now you can see in the clip that, Lomachenko slips it with his left hand and counters with his right hand. However, his feet do not remain in a stationary position. He immediately begins to move his lead foot along the conceptual triangle. In other words, you see that Lomachenko begins to establish an angle over his opponent.

Lomachenko’s reading of his opponents and moving into the right slots just makes him uncatchable. It’s like he’s prepared for the next step before you even think about what move you’re going to use. In-ring, it feels as if he can see everything in slow motion and then counter it easily. That’s something that makes him an exceptional fighter.

People who consume boxing know the importance of angles. They know the importance of every movement and how boxers use it to gain an edge over their opponent. Angling is a key aspect in boxing, and even without putting a recognition or conceptualization of triangle theory in place, we can still see that attacking an opponent from an angle is more beneficial than attacking head-on. 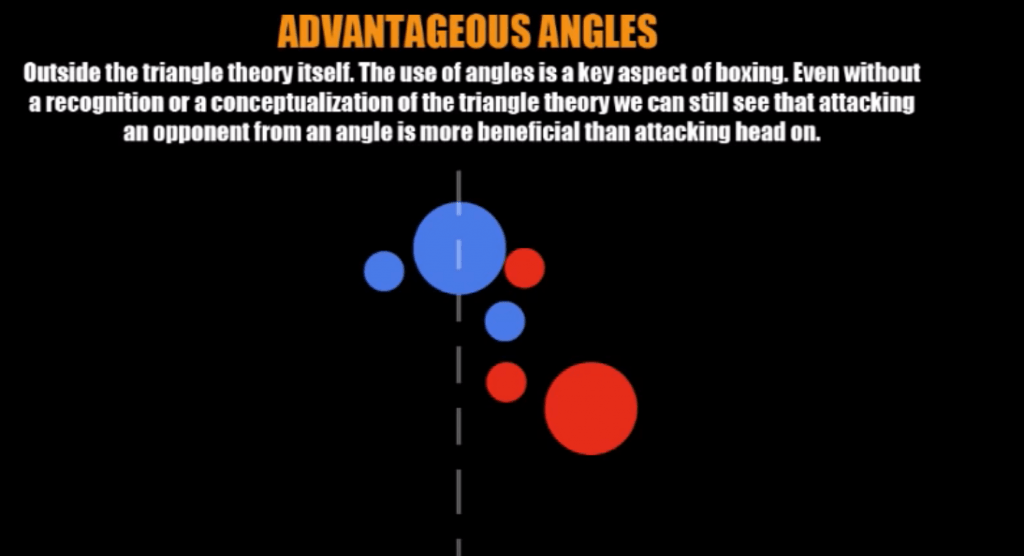 In the figure above, you can see the advantages of angling. In the clip below, you can see Lomachenko demonstrating the same.

Another clip below includes Lomachenko, see how he uses the head control, moves over the right by changing the angles and hits left to the body of his opponent. Watch how he sets up Piriyapinyo with the lead hand. He is constantly changing the angles and lading devastating punches after lead hand measuring. Simply fascinating stuff from Lomachenko, inarguably, the best pound for pound fighter in boxing today.

One more thing to note here is that Piriyapinyo can only defend himself against the punches coming in a straight line. And so, you can see Lomachenko gliding seamlessly across the ring, changing angles and catching Piriyapinyo off-guard with shots that he has no answer for. BRILLIANT CONSISTENCY IN CHANGE OF ANGLES on display here by Lomachenko.

Putting your opponent onto the backfoot

Great boxers who are capable of creating angles are always thinking about changing the angles, occupying their opponent and landing an unexpected punch. Being defensively responsible while applying your footwork is enough to put your opponent onto the backfoot. If you add changing the angles to the mix, it becomes really hard for your opponent to keep a track on you. If you get the hang of it, like Lomachenko, you can force your opponent to make positional adjustments, and while they are doing so, you can catch them so they can never settle.

The triangle theory is a scholastic concept only. In a practical framework, it is, of course, possible to punch and change the angle at the same time. Now, I know that I’ve specified that you can’t activate the triangle whilst punching. That’s true because it’s technically impossible for you to get in a triangle whilst punching. Thus, when you get into punching your opponent, it’s your opponent who can make use of this conceptual triangle theory.

I hope there’s no confusion with regards to this. Furthermore, when you keep adding triangles, and the angles get complex, it becomes a hex or diamond theory like I’ve stated before.