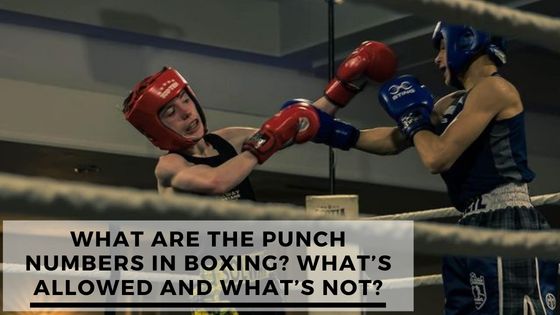 If you’ve ever been to a boxing gym, or you’ve watched a couple of boxing training videos.

You will certainly have heard the fight trainer yelling numbers in quick successions, like “1-5-3-2”, or “2-2-4-1”, and I’m pretty sure you might have been confused about what they meant initially, or whether they were just random numbers.

To this effect, we’ll be looking at some of the basic punch numbers, and what they mean.

In reality, there could be up to 10 boxing punch numbers, but in this article, we’ll be focusing on the main 6.

This is used to signify the jab.

The jab is the most important and commonly used punch by any boxer.

It is done by fully extending the lead hand to your opponent.

Even though there are some exceptions, the jab is mainly used as a range finder to prepare for the “2”.

This is known as a cross, and it usually accompanies the jab.

The cross is used by the rear hand or dominant hand to land a straight shot with power.

To do the cross, you have to rotate your upper body with your hips, using your rear hand to lead.

So basically, the main difference between the 1 and the 2, is the hand involved, and the rotation of the hips.

This is one of the trickiest punches to throw, but if perfected we’ll, it could be very effective.

As the name implies, it is thrown in a “hook” fashion with your lead hand, in such a way that it almost looks like a 90-degree angle.

To do this, you have to rotate and move your body to a forward position, so as to transfer power to your lead hand and leg.

This is the exact opposite of the lead hook.

Instead of moving and rotating your lead hand and leg, you bend your rear leg slightly, and punch with a hook sign, almost at a 90-degree angle.

The lead and the rear uppercut.

These are the two most similar punches among the lot.

This is primarily because the boxer can be in the same position while interchanging between the two.

The only difference is the hand with which the punch is thrown.

To perform the uppercut, you bend your knees slightly, and make a 90-degree angle with your hand, with your elbow directly facing the ground.

This would enable you to generate power from a lower position.

To someone new to boxing and combat sports in general, all these might seem too much, but it has a lot of advantages for the fighters.

Using numbers to mark punches makes it easy for the boxer to memorise combinations and punches, and when a fighter gets used to it during sparing and training, he/she can easily transfer it to real fight situations.