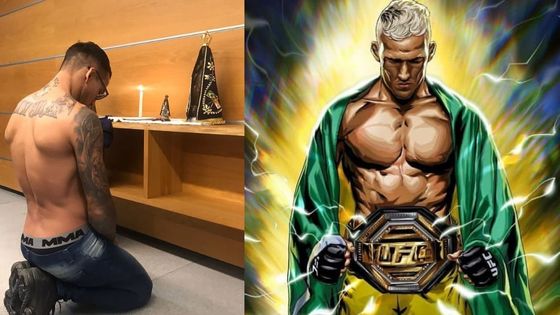 In this article, you will find out the real reasons why Charles Oliveira changed suddenly from an average fighter with a UFC record of 10 wins and 8 losses to a super fighter who runs through every title challenger the UFC throws at him.

The MMA community is still confused about the sudden rise of Charles Oliveira, even the best MMA fighters are still saying ‘he quits‘.

Justin Gaethje was one of the fighters who fell into this trap of underestimating Charles Oliveira because of his past losses.

Gaethje kept saying to the press that Charles Oliveira had ‘quit‘ in him and that once he gets dragged to the deep waters, he gives up.

Little did he know how much this would cost him! Gaethje did what he was expected to do and dragged Oliveira into the deep waters by knocking him down twice, Charles didn’t give up this time as Gaethje expected and came back with a knockdown of his own, then submitted Gaethje with a RNC.

So, what is the reason why Charles Oliveira changed from a gatekeeper to an elite champion?

1. The birth of his daughter Tayla

Many of his teammates say that the birth of his daughter Tayla Oliveira was the big trigger that changed his mindset and his perspective on life.

Since this loss, Charles went on a winning streak until he captured the lightweight title in 2021.

After his loss to Paul Felder, Charles Oliveira made the big decision to leave his lifelong team Macaco Gold Team (headed by Jorge “Macaco” Patino) where he started MMA in 2008, and went to Chute Boxe Diego Lima.

The reason behind this switch was because Macaco Gold Team was very focused on Brazilian Jiu Jitsu, on the other hand, Chute Boxe Diego Lima was well known for its high-level striking.

Since this change, Charles Oliveira started knocking out opponents left and right, and the ones he didn’t KO were outstruck and knocked down then finished with nasty submissions.

It is worth mentioning that although Charles Oliveira left Macaco Gold Team, he still kept his old jiu jitsu coach Jorge “Macaco” Patino.