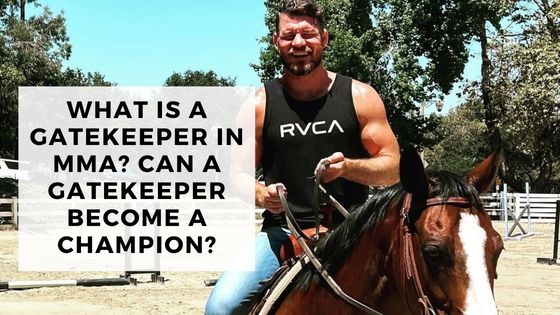 Ranking-wise, a gatekeeper is always ranked amongst the top ten but can’t break through the top five.

Are there gatekeepers who became champions?

Former middleweight champion Michael Bisping was considered a gatekeeper for the majority of his career, until he managed at the end of it to become champion.

Michael Bisping always failed to win title eliminators, but at the same time he was defeating every fighter the UFC threw at him.

Somehow, he got stuck in a limbo place between the journeymen and the elites until he got the opportunity to fight for the title against Luke Rockhold as a replacement for Chris Weidman.

Bisping seized the opportunity and ended his gatekeeper story once and for all, and entered history as a UFC champion.

Charles Oliveira was also considered a gatekeeper for a long time.

Although he won lots of fights, he was never consistent in his wins and always combined wins and losses, which made him a nightmare for journeymen fighters and an easy prey for the elite.

After 8 years of being a gatekeeper in the UFC (made his UFC debut in 2010), Charles Oliveira broke the curse and rode an amazing winning streak until he surprised the whole MMA community when he captured the lightweight title in 2021.

Fighters who stayed gatekeepers for all their careers

Although we started with the stories of two gatekeepers whose careers took a happy final twist, there are countless fighters who stayed as gatekeepers all their careers and couldn’t manage to live the thrill of becoming a champion one day.

Donald ‘Cowboy’ Cerrone was the most famous gatekeeper the UFC has ever seen!

In his prime, the man was a wrecking machine who destroyed everyone, but his problem was that he failed in big fights.

This happened again and again in his career until he became well-known within the MMA community for not performing in big fights.