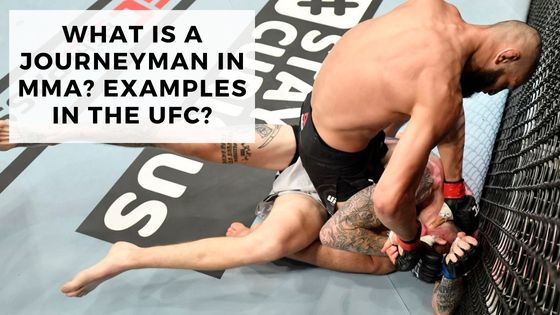 A journeyman in MMA is a fighter who never managed to be amongst the elite or the gatekeepers.

Historically, a journeyman is a craft worker whose rank is beyond an apprentice but can never be a master. A journeyman was historically always an employee and could never have a business of their own.

Let’s take the organization of the UFC as an example, a journeyman in the UFC is a fighter who spent their whole career fighting for the organization without being able to break through the top 15.

Usually, if a fighter gets signed at a young age in the UFC, they can break through the top 15 ranking after a few years.

Some of the fighters manage to become gatekeepers (see our article about gatekeepers), a few become elite, and one becomes the champion. A journeyman fighter is the lowest rank in the food chain!

Is a young, unranked fighter considered a journeyman?

You cannot call a young fighter a journeyman just because they are unranked or at the bottom of the food chain.

A journeyman fighter is a fighter who spent all or the majority of their career being unranked.

Also, another feature of a journeyman is fighting for many organizations without being able to become a real threat in any of them.

Then why do big organizations like the UFC still keep journeymen fighters under their banner if it is certain that they will never be a contender for the title?

There are multiple reasons why big MMA organizations like the UFC keep journeymen fighters under contract.

One of the biggest reasons is when the fighter is entertaining. UFC events have multiple layers in them, there is the main card and there is the preliminary card.

Prelim cards have fighters who are still at the beginning of their careers and whom the UFC is building up slowly.

Also, prelim cards have journeymen fighters who have exciting fighting styles and who can give the crowd amazing knockouts and keep them on the edge of their seats.

Furthermore, the UFC has a vicious habit of feeding journeymen fighters to rising talents.

Do you remember the guys who were fed to Khamzat Chimaev when he came to the UFC in his first three fights?

Of course you don’t remember their names! It’s because they were journeymen fighters who served a purpose, which was building up a new rising talent, the wolf Chimaev.

Here are the names of the journeymen who fought Khamzat Chimaev

He was the first journeyman fighter to be fed to the wolf when he arrived in the UFC.

When Phillips fought Chimaev, he was 35 years old (at the end of his career) with a record of 22 wins and 11 losses.

McKee is still a young fighter who was 26 years was when he fought Chimaev.

He still hasn’t reached his prime yet, but unfortunately for him, he was released by the UFC and he is on his way to becoming a journey fighter.

Gerald Meerschaert is the true definition of a journeyman fighter. He fought Chimaev in his third fight and now he is forever included in Khamzat’s highlight reel of KO’s.

Gerald Meerschaert was 35 years old when he fought Chimaev with a record of 35 wins, 15 losses and 4 no contests. He had a very long career and fought for numeral organizations.