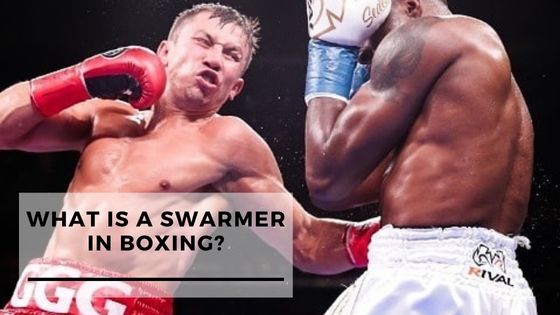 The art of boxing is fondly referred to as the “sweet science”, because of the diverse methods and strategies behind getting in the ring and hitting an opponent while not getting hit in return.

Contrary to what a layman might see at first glance, boxing isn’t just about two tough men punching each other in the face.

There are 5 traditional styles of boxing:

In this article we’ll discuss swarming; what a swarmer is, their characteristics, and notable swarmers in boxing history.

A swarmer is a fighter that relies on applying constant pressure, staying in their opponent’s face while punching them non-stop.

Swarmers march forward from the opening bell and back opponents up.

The game plan is to overwhelm their counterpart by giving them no breathing space, shutting them down from making reads or mustering any offense of their own.

Swarming aims to override an opponent’s defense, tire them out, and break them down, till they can no longer defend themselves intelligently.

It is also known as crowding, pressure fighting, or in-fighting.

For a swarmer to have success, they would have to possess specific attributes that sustain what is arguably the most physically tasking boxing style.

What are the characteristics of a swarmer

1. Cardio: Applying constant pressure throughout a fight is no joke. This type of high-intensity fighting requires an almost unlimited reserve of endurance.

A swarmer must have a durable gas tank to keep moving forward, throwing punches non-stop as well as evading counter-punches.

This is the ability to throw punches nonstop without losing rhythm or having their arms weaken.

This attribute consists of throwing consecutive chains of more than 5-punch combos with minimal resets in between.

Manny Pacquaio was one of the best at doing this, throwing lightning-quick combinations relentlessly, from multiple angles, throughout a fight.

3. Good Chin: When fighting in this style at a high level, no matter how good your defense is, it is inevitable that a swarmer will end up eating hard counters while at a close distance or when fighting in the pocket.

It is important to be able to shake off these punches when they do slip through.

4. Head movement: This is vital for a fighter whose fighting relies on getting into close range.

Good head movement means one can avoid counter-punches as they drive forward into the pocket.

Head movement was central to Mike Tyson’s peek-a-boo style, which was key to his success.

5. Hand Speed: The ability to beat opponents to the punch is necessary for fighting in the pocket.

Since swarmers like to stand in opponents’ faces and trade punches, they must be able to land first each time.

6. Footwork: Excellent footwork is necessary to cut off the cage, backing up opponents and giving them no escape routes.

This footwork also provides smart angles that opponents will struggle to defend against.

Some of the most notable swarmers in boxing