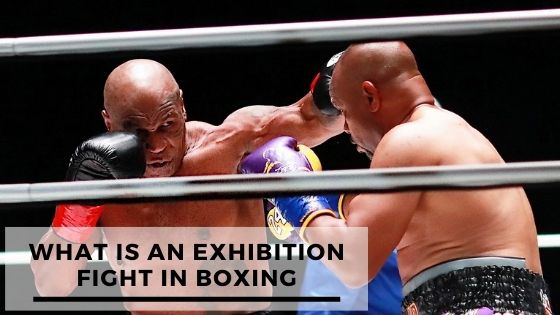 Exhibition fights in boxing are non-profit matches held for the entertainment of fans.

These fights are less physical than the official fights and involve celebrities, current champions or former champions.

Exhibition fights involve opponents showing off their skills while being friendly and respectful.

It is just two men/women playing around, having fun and yeah, getting paid.

These rules are more flexible and differ from match to match.

Some of the rules are as follows:

It is not registered on the boxers’ record

Exhibition fights are not listed on a boxer’s professional record.

This is fair enough – since the fights are just for fun anyways.

They consist of 4-8 rounds

Exhibition matches have between 4 – 8 rounds per match.

The use of headgears

Most exhibition matches mandate the use of headgear.

This rule is more relaxed in professional bouts.

The use of bigger gloves

The gloves used during exhibition matches weigh about 12 ounces – the weight of boxing gloves is measured in ounces (oz.)

There are no judges during exhibition matches.

This makes sense since the fights are just for fun and entertainment.

Yeah, why spoil the fun?

Even in plays, no one likes to lose – fixing a winner takes the whole fun vibe away from the match.

The boxing world has witnessed some highly entertaining exhibition matches, these matches had fans buzzing.

Some of such matches are:

Any day anytime Mayweather is a fan favourite and his matches come with much hype and frenzy, this was not any different.

His opponent, who is popular for his YouTube channel came into the match having just one professional bout in his career.

No winner was announced, but I guess in our hearts of hearts we know who won, Wink!

This is another notable match between a legendary boxer, Mike Tyson and former four-division world champion, Roy Jones Jr.

Both boxers had long retired from boxing.

The match was more like a match between two old, retired greats of boxing trying to get one over the other.