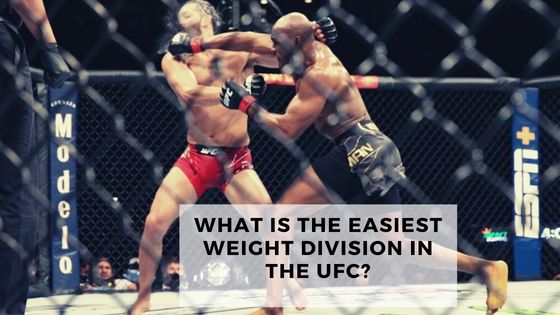 This goes without any debate, it is hands down the heavyweight division.

The heavyweight division in all MMA organizations is the least skilled division, where fighters don’t have a wide range of tools to use in the cage.

Heavyweights in general are either strikers or grapplers, only a few of them can do both.

Also, heavyweights in general don’t use many strategies in one fight.

Usually, they build all their fight camp on one strategy, and they apply it in the fight.

Compare this to the lightweight division or the featherweight division, where all the fighters know how to grapple and how to strike.

Let’s take the top fighters of the lightweight division as an example, Islam Makhachev can adapt his strategy depending on his opponent.

Do you remember when he fought Charles Oliveira and outstruck him and knocked him down twice?

Now compare these fighters to the top UFC heavyweights.

Most of the heavyweights don’t even master one martial art, let alone two, many of them come from American football or are just built strong and have powerful punches.

Francis Ngannou is a great example of that.

In all his life he has never done any martial art, he started MMA very late in his life after immigrating illegally to France.

Even when he got to the UFC, his only skill was his power, no jiu jitsu, no wrestling, nothing.

All he could do is to swing powerful haymakers until he sends his opponents to the other dimension.

But still, he managed to become the heavyweight champion of the UFC.

Now compare Ngannou to Makhachev or any other top lightweight fighter, and you will understand the huge technical gap between the two divisions.

It is worth mentioning that there are always exceptions in the heavyweight division.

Jon Jones has competed in wrestling since he was a child, now many MMA fans consider him the best pound-for-pound fighter in the world.

His fighting IQ is unmatched, and the tools he has in his arsenal are almost infinite. But obviously, he is only the exception that confirms the rule.