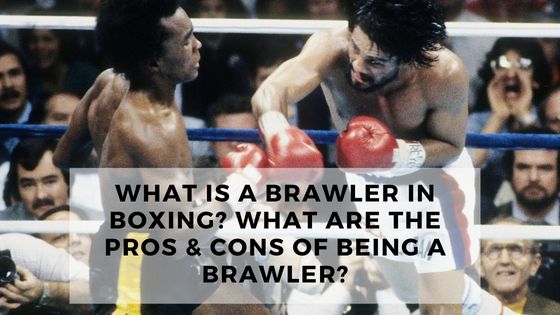 Outboxing, inboxing, brawling, and boxer-punching are the four major styles of boxing. In this article, we will take a quick look at the brawler style of boxing and how it is implemented in bouts.

What is a brawler in boxing?

A brawler, also known as a slugger, is a ruthless and wild fighter who fights offensively and aggressively, always looking for a clean shot and attempting to knock out their opponent.

A brawler focuses on striking their opponent with a powerful and heavy shot, which leaves them open to counter-punching most of the time.

One thing common to brawlers is their decisiveness, agility, and the pressure they apply in fights.

A brawler’s first aim is to hit; in any instance, he’s always on the attack, thereby holding his opponent in a defensive corner.

Though brawlers are less mobile in the ring, they make use of their punching power to outbox their opponents.

Brawlers must possess strong endurance and a good defensive system.

Due to their all-out attacking tactics, they are left open to counterattack and the intake of punches as a form of punishment from their opponent, so they must train well to build up a body that can take and endure this punishment without losing their stance or focus.

What are the advantages of being a brawler? Is it good to be a brawler?

Fighters who have mastered this style of boxing tend to outshine most of their counterparts.

In the statistics of the greatest fighters of all time, brawlers tend to occupy a good percentage of the numbers

• One advantage of being a brawler is that they pay less attention to strategy and techniques, in that they rely more on the power of their punches.

• Unlike an outboxer, a brawler is not concerned with ring footwork or speed, this allows them to concentrate more on punching power.

• Their physique and strong chin enable them to withstand counterpunches better than their adversary.

Brawling is good when you know the pros and cons of it.

Roberto Duran, one of the greatest fighters of all time, was a brawler in his prime.

Among all the styles of boxing, this one gives fans and viewers the most exciting moments to watch.