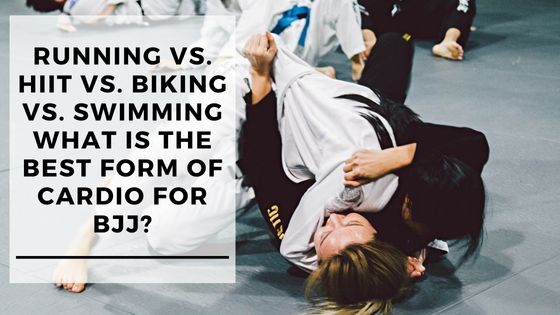 Running Vs. HIIT Vs. Biking Vs. Swimming, what is the best form of cardio for Brazilian jiu jitsu?

They are both called cardio, but they are not the same thing.

During the 90s, when Brazilian jiu jitsu was still at the beginning of its fame, athletes didn’t know how to improve their cardio, each BJJ athlete had their own theory about it.

Some BJJ athletes adopted roadwork (running) like boxers, others adopted high-intensity interval training (HIIT), and others were doing triathlons which include swimming and cycling.

Each athlete came up with their own theory of how to improve cardio.

This was normal as the sport of BJJ was still at its beginning, but right now, the sport has reached its maturity, BJJ athletes all agree on one thing, the best way to do cardio for BJJ is by rolling (which means sparring in case you are a BJJ beginner).

How can you increase your cardio with rolling?

Let’s be honest, rolling once a week for 30 minutes won’t do much for your cardio.

If you are training for a competition, you need to roll as much as you can on a daily basis. Rolling should be with different partners who have different jiu jitsu levels.

When you roll with a black belt, they make you work more and think more, which requires double the energy you would need to roll with a blue belt.

At the same time, this doesn’t mean you should roll only with black belts to build strong cardio, definitely not!

You need also to roll with practitioners with low-level jiujitsu because you won’t get tapped every minute as you would against a black belt. This will allow you to roll longer and get used to more volume.

A shark tank is a practice that jiu jitsu gyms do for members who have a competition coming up.

What is a shark tank?

A shark tank is centered around one athlete. Rolling partners line up and the athlete rolls against them all, one after another.

Once the athlete submits a partner or gets submitted by one, they get to the next partner without having any rest.

The advantage of shark tanks is that the rolling partners stay fresh and get rest while the athlete who the shark tank revolves around stays active and doesn’t get any rest.

The fact that the athlete is tired and has to face a fresh partner puts them at a clear disadvantage, which pushes their cardio to the extreme.