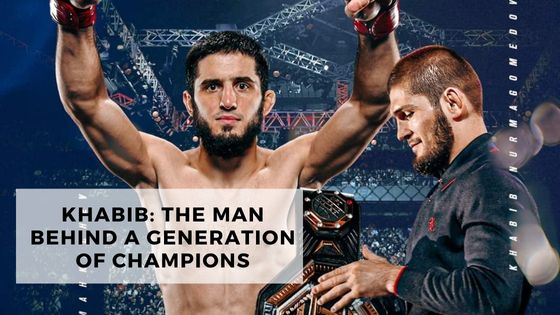 After Khabib retired in 2020, he dedicated himself to helping his brothers from Dagestan.

Here is a list of the most popular fighters Khabib trains:

Is Khabib a full-time trainer?

Khabib is not a full-time trainer, he said it clearly in an interview with the Russian channel RT.

He doesn’t aspire to become a full-time trainer, his goal is to help his Dagestani brothers with the experience he has in the UFC.

After his retirement, he pledged to help all his Dagestani brothers to dominate the UFC and the other MMA organizations.

Now he is responsible for all training camps, fight preparations, and strategies.

Alongside his coaching responsibilities, Khabib is also an MMA promoter who owns the organization Eagle FC.

Does Khabib corner all his fighters?

Khabib doesn’t corner all the Dagestani fighters, he coaches only a few, the best. He trains them all but doesn’t go to everybody’s fight.

After all, he is a very busy man with many different vocations.

Is Khabib still with AKA?

Khabib is a loyal individual, AKA has built him and made him the champion he is right now, which is why he is still coaching his own fighters under the name of AKA.

When Islam Makhachev won the UFC lightweight, he brought the belt directly to AKA, his home gym, as a gesture of loyalty towards his old coach Javier Mendez.