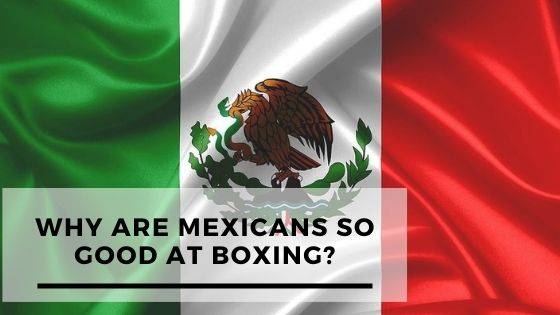 Just like what basketball is to the United States, and soccer to Brazil, there is something rather special about Mexico and boxing.

The country of Mexico has produced over 200 boxing champions, like Canelo Alvarez, Julio Cesar Chavez, and Ricardo Lopez.

Even a lot of boxing champions from the United States have Mexican origin and names.

So, given all these, it begs the question; what makes Mexicans so darn good at boxing?

For a country that has a population of about 120 million people, 55.7 million people living in poverty is a clear indication of the economic and financial status of the country.

A lot of Mexicans take up boxing as a means to escape this cycle of poverty, given boxing’s lucrativeness; this is why they put their all into it.

Take Julio Cesar Chavez for example, he had one of the worst childhood lifestyles anyone could imagine, having lived in an abandoned railroad with his siblings.

This extreme level of poverty drove him to change his family’s life through boxing.

Imagine that from the moment you begin to assimilate as a child, all you hear and see everyone talk about and do is boxing, there’s every chance that you will more than likely end up being really good at it.

Boxing is more than just a sport in Mexico, it is a culture, a heritage if you may, and from the moment a child is born, he/she gets inducted into that culture.

Canelo Alverez got into boxing before he even hit 13 years, all because he watched his elder brother compete, no other country in the world loves and cherishes boxing as much as Mexicans, as a result, no other country is as good as them.

Machismo is simply a sense of intense bravery, coupled with an aggressive masculine pride.

And make no mistake about it, there is arguably no county with as many brave men as Mexico.

Think about it, in the second world war, no other group won as many medals in the United States Army as much as the Mexican-Americans.

Given this intense level of bravery and courage, Mexicans are able to fight at a more aggressive and higher pace than their competitors.

Not just in boxing alone, but in combat sports in general, the chin on any Mexican fighter is one of the most difficult to crack, and this quality makes them so durable.

Fighters like Canelo Alvarez and Tony Ferguson have been losing in a fight a couple of times, but they are able to rally and pull through because of their durability.

So, that’s about it for why Mexicans are so good at boxing, but the reader might be wondering.

Why do Mexicans have such solid chins?

Well, when you’ve spent all your life from childhood to adulthood constantly getting punched in the face, you definitely become more durable.

Mexicans are known to have one of the toughest and most difficult upbringings, combine this with how brave they inherently are, and they will over the course of their careers, develop solid chins.