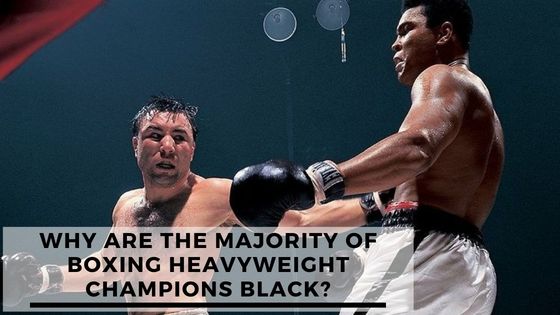 Well, these are some of the famous boxing heavyweights that have one point or the other held a heavyweight championship, and you know what the funny thing is, they’re all blacks.

We could easily write a 200-word article about all boxing heavyweight champions past and present that are African Americans, and we wouldn’t have exhausted them all.

So this begs the question, “why are there so many black heavyweight champions”.

There is a saying that “oppression breeds aggression” and that can certainly apply to this scenario.

African Americans are undoubtedly one of the most oppressed sections in the USA, with cases of racism still on a rise.

Kids who grow up under this level of oppression and intimidation will more often than not have a tendency to be more violent and aggressive than other kids.

And considering boxing is a violent sport, this built-up frustration and anger are brought to the fore when they step into the ring and are face to face with opponents that have been far less oppressed.

In a way, this is very similar to why Mexicans are so good at combat sports.

The high level of poverty means that most young guys resort to things like armed robbery, drug dealing and the likes.

For the ones that steer clear of anything illegal, boxing is seen as a means to make it out of the hood, and as such, they pursue it wholeheartedly.

By dedicating their whole childhood to boxing training while others are in school, they inadvertently have an undeniable edge.

This might be the most controversial of all, but blacks and whites are certainly built differently.

This isn’t to say that blacks are stronger, but scenarios might favour them because of their physique.

Take swimming, for example, it is generally white-dominated, this is because white people tend to have less lean muscle mass.

African Americans and blacks, in general, have a higher bone density and a higher percentage of fast-twitch muscle fibres.

This means that they are a lot more explosive and powerful in fights.

And for a heavyweight, power is as important as anything.

We all need someone to look up to while we are young, a hero of some sort.

For a lot of young black Americans, that hero was and is still Muhammed Ali.

As a child, when you examine what he achieved, and that a lot of other African Americans too in the sport of boxing.

It would open up a realm of possibility in your mind that you could also achieve such a feat one day, regardless of your current position.

And you would be surprised how that single line of thought could shape a boxer’s career.

However controversial as this topic may seem, you can certainly not deny its relevance.

For the reasons explained above and some others, African Americans certainly have a chip on their shoulder when it comes to boxing.