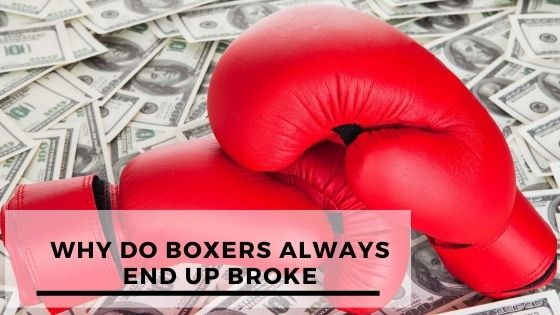 Muhammed Ali, one of boxing’s greatest ever fighters revealed that he was “broke” in 1978, Mike Tyson, arguably the most successful athlete of his generation, declared bankruptcy in 2003, and Manny Pacquiao, in 2016 had an accumulated tax debt of over $60 million.

I bring these 3 scenarios to examine the fact that for a sport wherein people rake in thousands and millions of dollars yearly, a lot of them seem to end up broke upon retirement.

If this phenomenon interests you as much as it did me, then this read is definitely for you.

So why do boxers always seem to end up broke?

It’s no surprise that a large percentage of boxers are usually from relatively poor backgrounds; Mike Tyson, Manny Pacquiao, and even Floyd Mayweather all had very humble beginnings,

Do we really need to talk about this?

Boxers from times past till now have always had a history of impulse spending.

Just on clothes and jewellery alone, couple this with the fact that he spent close to $5 million on 19 cars and motorbikes for himself and his friends, and then it’s easy to understand why he ended up bankrupt.

Investing your money can be good, or it could be really bad.

For a lot of boxers, it is usually the latter. Many boxers throughout their careers and after retirement undertake terrible ventures.

Just take a look at Muhammed Ali, after retirement, and his two businesses.

The Champ Burger and Mr Champ soda both failed terribly, coupled with failed movie deals too.

Whether they would admit it to themselves or not, a lot of boxers have a gambling addiction, and should this really be a surprise?

With so much money in the bank and a lot of idle time, one is bound to pick up some bad habits.

Floyd Mayweather is widely known for bragging about his winnings from gambling all over social media, but there were reports from Vegas gambling sources in 2018 that he was down over $50 million in gambling losses.

Whether the numbers are real or not doesn’t matter, but the truth is Floyd has definitely lost a great sum from his gambling addiction.

A lot of boxers lack proper education and it shows in this aspect.

There are legal ways of evading tax( Tax avoidance), but a lot of boxers don’t know this, and over the course of illegally evading taxes throughout their careers, they could end up with a tax bill of over $60million like Manny Pacquiao.

This list could be endless, there are other factors like divorce, legal troubles, insensitive family members, lack of proper education, Et.

Al, but what is clear is that future boxers and managers need to learn from the past boxers, in order for them not to make the same mistakes and follow in a long line of great boxers that ended up broken.