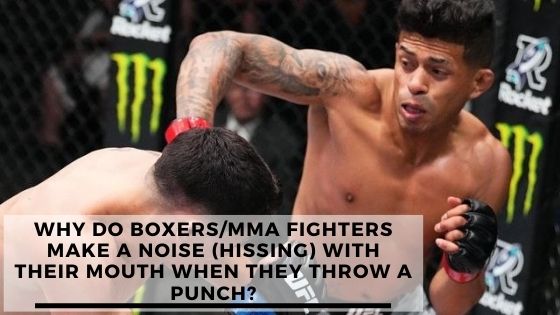 Why Do Boxers/MMA Fighters Make A Noise With their Mouth ‘hiss’ When They Throw A Punch?

Sometimes watching a boxing/MMA fight sounds like a pair of bobcats going at it.

As a newcomer to the sport, you can’t help but notice, and sometimes cringe at these hisses or grunts.

And it is completely normal.

The reason behind boxers/MMA fighters making a hissing sound as they throw punches is down to basic boxing/striking technique.

The noise they make is a byproduct of being trained to exhale right as they throw a punch.

This is because punches and strikes generally move faster and hit harder when thrown simultaneously with a sharp exhalation.

This breathing is done through closed teeth, from mouths mostly occupied by a mouth guard, and so the breath comes out with a hissing or grunting sound.

The mouth must be closed when this exhalation is done because an open mouth in a fight can result in a broken jaw.

When learning to throw a punch, one of the first things you are taught is to sharply release your breath right as you unleash.

These sharp huffs engage your core, pulling explosive power from the hips and legs, and in the absence of it, one would be punching with power generated from the arms alone.

You’d notice that the harder they punch, the louder they hiss.

This means exhalation serves as a source of an extra energy burst when they need it.

This technique holds true across many other physical activities. In weightlifting, you are also taught to sharply exhale each time you lift or push the weights.

Also watching lawn tennis, you can always hear the players utter a loud yell each time they strike the ball.

Apart from strike efficiency, hissing and grunting when punching is also beneficial in other ways.

It strengthens the core in anticipation of counterstrikes.

A fighter is most vulnerable to being hit right after they have thrown a strike.

Combining punches with sharp exhalation tightens the abdominal muscles, and braces the core to better absorb, and withstand blows.

This breathing technique also means that there’s a much lower chance of getting the wind knocked out of one’s lungs.

If you’ve ever experienced having the wind knocked out of you, you’d realize that it is a crippling blow that can end a fight, or seriously compromise you.

Being hit in the body while the lungs are full of air is an unpleasant feeling that transcends combat sports or sports in general.

Simply running headlong into another person can sometimes even knock the wind out of your lungs and knock you off your feet.

Another thing to note is that this breathing technique is a means of energy conservation.

A fighter with controlled breathing remains in better condition than one who doesn’t regulate their breathing(breathing techniques are basics of fighting, so it would be rare to find one who doesn’t practice it).

Boxing and MMA may at times seem easy to do, looking like a regular street brawl any average Joe can engage in.

However, these martial arts are built on and backed by science.

Techniques like the one mentioned above are the reasons why boxers can fight for 25-50 minutes without getting tired, while most street brawls last less than 3 minutes.