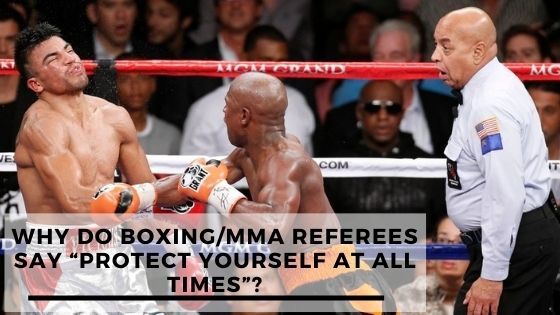 ‘Alright gentlemen, we’ve already been through the rules.

Let’s have a clean fight, obey my instructions and protect yourself at all times. Touch gloves if you want to, and go back to your corners.’

These are the instructions the referee gives to fighters in the middle of the ring before a boxing or MMA match commences.

In this article, we’ll be discussing what referees mean by protecting yourself at all times.

Boxing and MMA as with combat sports are premises where the counterparts are actively trying to hurt each other.

This means there is a potential for unlimited amounts of damage, ranging from concussions to broken bones, cuts, bruises or even death.

Fighters must endeavour to take as little damage as possible, actively trying to protect themselves throughout their duration in the ring or cage.

A referee has the right to end a fight if one of the combatants is unable to defend himself at any point in the fight.

Protecting yourself at all times means that as long the fight is on, you are responsible for your safety, just as it is your opponent’s responsibility to attack you.

Some examples that can better explain the scenario of a fighter ignoring this command are:

Matt Hughes, in a title defence against Frank Trigg, received an illegal kick to the groin.

Hughes immediately paused and began signalling to the referee that he had been fouled, but the ref didn’t notice this and declined the call for a timeout.

In this moment of concentration lapse, Trigg landed a flurry of strikes that downed Hughes and caught him in a tight rear-naked choke.

Fortunately for Hughes, he was able to survive the onslaught, pulling off a historic comeback to recover and in turn win by submission due to a rear-naked choke.

Another example would be Victor Ortiz who after headbutting Floyd Mayweather, dropped his guard to apologize.

Mayweather struck back and caught him clean with 2 consecutive right hooks, resulting in a knockout.

Afterwards, Floyd said, ‘You gotta protect yourself at all times.’

The instructions to protect yourself at all times are in place to dissuade fighters from stopping to adjust gloves, mouth guards, footwear, shorts or something along those lines.

Actions like that are risky and can result in them getting badly hurt.

Some fighters, being driven by adrenaline or malicious intent, will do whatever they can to win.

It is then the referee’s duty to control the action and enforce the rules, but a fighter’s responsibility is to protect themselves from sucker punches or cheap shots.

The most destructive strikes are the ones you don’t see coming.

Origins of the expression

There are no clear sources for the origin of the expression, but it is believed to be as old as the Queensberry rules.

When boxing was divided into three-minute rounds, along with the introduction of padded gloves, weight classes, and the 10-second knockdown count.