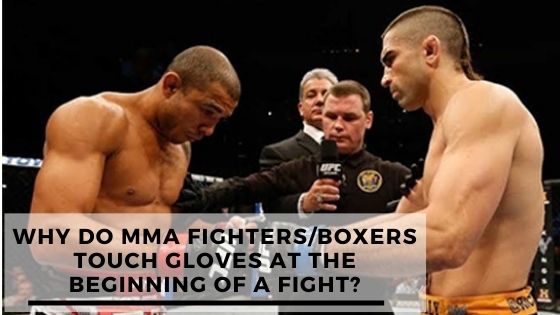 If you regularly watch boxing or MMA, you would definitely have noticed fighters touch gloves with their opponents at the start of a fight, and you may be wondering why.

Touching gloves among fighters is a traditional sign of respect for their counterparts.

This gesture promotes sportsmanship which is the foundation on which all martial arts are built.

It is the equivalent of soccer players lining up and exchanging handshakes or hugs before the commencement of a game.

When the referee gives the fighters instructions before the bout begins, we can sometimes clearly hear him tell them “touch gloves if you want to”, making it evident that fighters don’t need to touch gloves.

Fighters may touch gloves at the start of a new round to signify that the opponent earned their respect in the previous round.

We can also see fighters touch gloves to show acknowledgement of their opponent’s skill or toughness after a heated exchange or a knockdown.

Eg Stephen Thompson repeatedly knocked down Vicente Luque, letting him back up, and reaching out for a glove touch to acknowledge his toughness.

Another instance where we see glove touching is as a form of apology, after an incidental illegal strike; (eye-poke or groin strike).

Given that it isn’t mandatory, fighters with personal animosity may choose not to, but we’ve seen fighters with some of the worst rivalries still go-ahead to touch gloves.

The most significant example of this is Jon Jones vs Daniel Cormier, arguably MMA’s most heated, high-profile rivalry.

Why do fighters/boxers refuse to touch gloves sometimes?

Most fighters usually have nothing against each other.

Despite trash-talking and exaggerated animosity, they’re prizefighters who face whoever will advance their career.

That said, there are always instances where the fighters genuinely hate their opponents, have no respect for them, and can’t wait to punch them in the face.

It is not uncommon to see fighters who have had a heated buildup to a fight choose not to touch gloves.

Some fighters who engage in extreme psychological warfare become notorious for having a history of not touching gloves with opponents. E.g Ronda Rousey, Conor Mcgregor.

The touching of gloves is a tradition that emanated from boxing.

Though it is not clear exactly when it began, it is believed that glove touching was initiated to replace handshakes, which is impossible to do while wearing 10-ounce gloves.

Shows of respect and sportsmanship, such as touching gloves and exchanging hugs after fights are the kind of displays that bring a good light on combat sports, and we hope to see it continue.