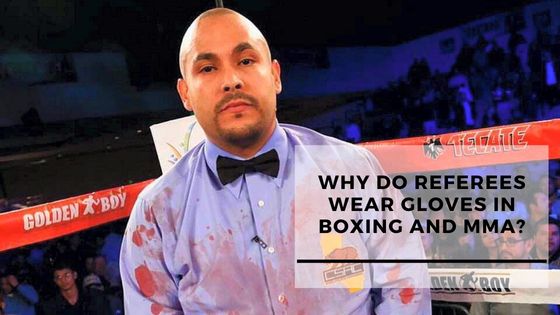 These rules are in place to prevent the transmission of contagious diseases.

In 1987, it became mandatory for referees and cornermen in all sanctioned boxing matches to wear rubber gloves while officiating.

This mandate was affected 8 years after the discovery of the Acquired Immune Deficiency Syndrome(AIDS).

The idea was to help curb the spread of the disease, which can be contracted through blood and other bodily fluids.

It was first implemented by the New Jersey Athletic Control Board and picked up by other state boxing commissions including Florida, and Illinois. New York, California and Michigan.

And it remained that way since then.

Over the years, several viral diseases have come and gone, all of which can be easily spread by contact with blood, and saliva.

Also, staphylococcus and similar infections can be spread by skin contact, so a case can be argued for the usefulness of referees wearing gloves.

But the rationale of making referees wear gloves can be questioned because, how far can gloves go in protecting referees who have their faces open, or the fighters who are constantly in contact with each other, grappling and clinching.

Today, the chances of these afflictions being transmitted in a boxing ring or MMA cage are little to zero, as fighters are required to undergo multiple medical tests to obtain clearance before each fight.

These tests make it almost impossible for fighters to put referees as well as opponents at risk of getting infected.