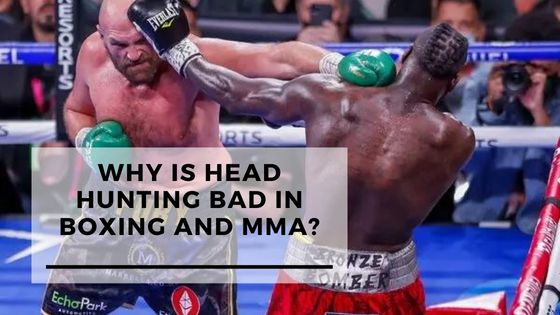 Headhunting in boxing is the habit of exclusively aiming strikes at an opponent’s head, hoping to land a knockout blow.

It is a limited style of fighting because it neglects the many other ways to break down an opponent. Headhunting is predictable, and thus easier to defend against.

It can also make a fighter overzealous for a knockout, leaving them open to counters.

Why head hunting is bad in boxing and MMA?

The general opinion of a fighter who headhunts depends on the amount of success they’ve had fighting like that.

A fighter who has 20 KOs on their record will be given more of a free pass due to the effectiveness of their style. Professionals can master the art of headhunting and find success with it.

As the saying commonly goes, “why fix what’s not broken?”.

However, a fighter who’s only trained for a couple of years, and fights by only targeting the head will be considered an inexperienced, ineffective fighter.

This is because they will struggle against better opponents, who can easily protect their heads and counter effectively.

Headhunting is a bad habit for a beginner. It is more advisable to follow a methodical approach to fighting, mixing up strikes to keep opponents guessing.

Attacking the body of a fighter with a high guard will make them drop their hands, making it even easier to land on their head.

Also, attacks on the body can severely deplete their energy reserve, compromise their movement, or lead to a knockout.

Lastly, a well-placed punch to the liver or kidney can fold even the toughest fighters.

Boxing legend Joe Frazier, the first man to beat Mohammed Ali, had a habit of targeting heavy blows at an opponent’s hips.

This greatly limited their ability to move away, playing into his swarming style of fighting.

It was instrumental in his defeat of the greatest in the first of their 3 fights.

We can also recall how Stipe Miocic was being outboxed by Cormier in their title rematch until the third round.

Miocic changed tactics, repeatedly landing hard hooks to DC’s midriff, changing the momentum of the fight and leading to a knockout.

These examples only scratch the surface of the benefits that can be reaped from investing in bodywork.

Why fighters may headhunt?

The thrill of punching an opponent in the face, coupled with the desire to knock someone out is predominant.

So they fail to understand just how effective body shots are.

Kidney, liver, and solar plexus shots are immensely efficient in breaking down opponents and setting up knockout strikes.

When perfectly placed, they serve as knockout shots on their own.

Some of the most dangerous combos involve a sequence of shots to the head and body unpredictably.

Mike Tyson’s trademark finishing combo was a left hook to the head, one to the body, and back to the head.

Over-reliance on power: Many fighters have so much belief in their knockout power that they go into fights with one thing in mind; get a knockout as quickly as they can, in the most devastating fashion possible.

Headhunting is common in the heavier-weight classes, especially in the heavyweight divisions.

Most of them are aware that with a single strike they can put opponents to sleep, so some of them subsequently put all their effort into landing that one shot.

Tunnel vision: This has to do with self-control. Many fighters get sucked into tunnel vision as soon as they “smell blood”.

With reference to sharks going crazy after scenting blood in the water, fighters who have stunned or hurt an opponent can go into a frenzy and rush in wildly for a finish.

They ignore bodywork, throwing one haymaker after the other, targeting the head in an attempt to capitalize and close the show.

We’ve seen this backfire many times as they leave themselves wide open to counters, or punch themselves out and get fatigued.

Deontay Wilder: Ask any boxing fan and they’ll tell you, “Wilder only has a right hand”. And in some ways they are right.

Deontay picked up boxing late. He lacks many boxing fundamentals, which he makes up for by having freakishly devastating power in his hands.

Having shown the ability to render opponents unconscious with a single blow on countless occasions, he spends most of his ring time aiming at the head and trying to land that one punch. It worked for him in all his fights except the 3 against Tyson Fury.

Mohammed Ali: Ali was notorious for flouting most of the basic boxing guidelines. This was part of what made him so special.

For example, he fought with his hands held low, relying on extraordinary lateral movement and footwork to evade punches.

Ali was a headhunter who would exclusively target an opponent’s head with hundreds of lightning-quick punches, which would add up, resulting in a KO or decision victory.

Francis Ngannou & Derrick Lewis: These UFC heavyweights are arguably the hardest hitters ever seen in MMA.

Both these guys know that they only have to touch an opponent to knock them out, without even having to land clean. So their game plan is aimed at landing on an opponent’s head and putting them to sleep.

This confidence means they can ignore complex setups and bodywork, aiming to land that one shot. (Francis looks to be adding new weapons to his arsenal with every fight, and it will be interesting to see how far he develops).