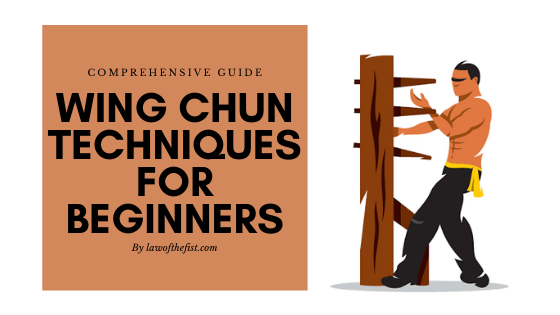 Wing Chun as a martial art is really unique. Its intricacies and little nuances can be instrumental in self-defense. It’s well-known for simultaneous block and strike, unique structures, trapping, attacking from the shortest distance, rapid vertical punches, and forward pressure to name a few.

Most of these techniques are really effective when you use them in a self-defense scenario. The majority of the Wing Chun schools today are ineffective in their operation which makes the teaching and training quite ineffective. We at Law of the Fist want to provide as much information as we can, so you can be able enough to judge what’s right or wrong.

If you’re a beginner keen on learning about Wing Chun and its techniques, here’s a comprehensive list of techniques – Blocking, Elbow, Punch and Strike that you should know.

Biu Sau is a blocking technique which involves thrusting fingers, darting hand. You can use Biu Sau to either block or strike. It is generally used to target soft spots on your opponents – generally eyes or beck. By applying it to Chinese pressure points on the chest, you can maximize the impact. However, make sure to condition your fingers beforehand.

Bong Sau is also known as Wing Armor Wing Hand. This technique is usually paired with Lap Sau and shift.

Chi Sau or Chi Sao refers to sticking hands. It helps practitioners develop their sensitivity, reflexes, structures, and form. Generally, practitioners start with single-handed Chi Sao and Daan Chi Sao before they move to two-handed Chi Sao which is also known as rolling.

Fook Sau or the technique of subduing hand which involves bridging and transitioning. It allows students to understand positioning so they can set themselves up to utilize advanced blocking and striking techniques.

Gang Sau is the technique of cultivating hand, splitting hand or splitting block. It is a technique that uses a low/mid-level blocking movie to stop incoming rib punches on mid-level. This technique is often combined with a punch so the practitioners can block and counterattack at the same time.

Gum Sau or Pressing Hand is an open hand blocking technique that is used to block an incoming low kick or punch. You can learn more about Gum Sau in this video below:

Huen Sau is also known as the Circling Hand technique. It is used to change positions while maintaining control of an opponent’s arm. This technique emphasizes on your position so to help you in utilizing it to the best of your advantage.

Kwan Sau is also known as the Rotating Hand technique which allows you to block high as well as low attacks simultaneously. Thus, if your opponent decides to throw a punch and low kick simultaneously, Kwan Sau will help you deal with it.

Lap Sau or Grabbing Hand technique allows a Wing Chun Student to grab an opponent’s arm with an intention of deflecting a potential attack. You can use Lap Sau to pull your opponent off his line and disrupt his balance.

Man Sau or Mun Say is a technique which is referred to as the Inquisitive Hand or an Asking Hand. It is used to deflect an overhand strike. Man Sau is often combined with an elbow strike to the back or the head of your opponent’s arm with the intention of deflecting a strike.

Pak Sau or Pak Sao is a Slapping Block that allows you to deflect an incoming attack. It is a type of palm block which you can use to divert your opponent’s strike.

Pai Jarn or Pie Jarn is a Horizontal Elbow Striking technique. This technique is also known as Hacking Elbow Strike. It is a standard elbow strike where practitioners learn to hit a target, generally an opponent’s head from a close range.

We’ve already seen Biu Sau in a defensive sense but this move can be used as an effective striking technique as well.

One Inch punch is a move that has popularized Wing Chun across the world. It’s a striking technique that allows the practitioners to generate significant power when hitting target at a close range. This technique has been popularized by Bruce Lee and has been demonstrated during an actual tournament.

Wing Chun Double Punch technique allows you to throw two punches simultaneously. It’s not the same as the double fist punch. Herein, both the punches land at the same time as opposed to a double fist punch where one lands after the other.

As a beginner, I’d urge you to watch each of these Wing Chun moves closely. Once you start practicing Wing Chun and become comfortable setting traps and doing attacking moves, you can start with live sparring. Do not shy away from sparring as it will allow you to understand your abilities better. It’ll be unpredictable and uncooperative which implies using proper techniques without losing concentration.