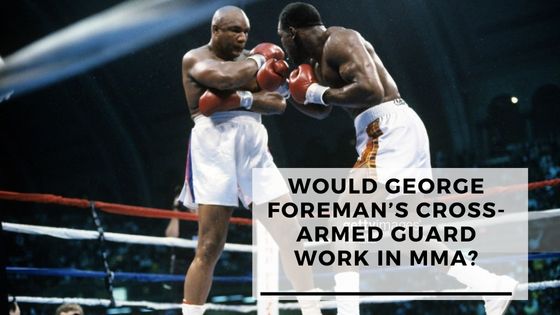 Dating back to 1825, the cross-armed guard is one of the oldest boxing techniques.

It’s done by holding your arms crossed over each other, kind of holding them to protect your chin.

Back in the day, boxing was more about throwing powerful blows, rather than making fast combinations, and this guard was one of the first ones that resulted useful against multiple punches.

Its popularity began decreasing with time, and the last famous boxer to fight cross-armed was George Foreman.

So let’s take a look at its characteristics, to see how it can be applied to MMA

What are the pros of the cross-armed guard?

The cross-armed guard is a very strong guard when it comes to defending, since it involves a lot the elbows, alongside the forearms.

This means that it is very effective against straight blows, but also against hooks that can be blocked with the elbows.

Punching your elbows can also hurt your opponent, giving you an offensive advantage.

It also provides a wider field of view, since it doesn’t cover your eyes as a high guard would do.

This gives you a chance to see clearly, and have a better reaction time.

What are the cons of the cross-armed guard?

Having your arms folded makes counterpunching a bit slower since in that position your arms would naturally unfold horizontally, and you don’t want that.

What Foreman would usually do is extend one of his arms while blocking to create some distance and mess with his opponent’s visual field, and then counterattack.

Another disadvantage is that while it protects your chin very well, it leaves a lot of space for body shots. This can be compensated with a lot of head movement, and bending at the waist

So, would the cross-armed guard work in MMA?

We have actually seen fighters like Yoel Romero try it before, but it doesn’t seem to stick.

The main problem is that it does leave the core open, and in MMA it is quite easy for your opponent to take advantage of that with a kick.

But one of its main advantages works perfectly for MMA, and it’s the presence of the elbow in this guard.

In fact, the crossed-arm guard was invented for bare-knuckle boxing, because it inflicted severe damage on the opponent’s fists.

Seeing this, this type of guard can be useful against rivals that punch constantly, especially against those with powerful hooks.

It can take a bit of practice, but if used properly it can result very effectively.