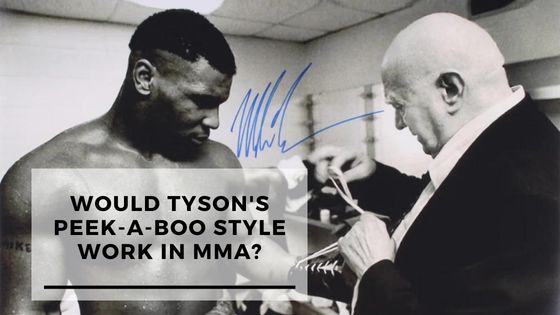 Considered by many people as the best heavyweight boxer (perhaps the best boxer) in history, Mike Tyson’s combat skills were unprecedented and left a huge mark in the fighting world.

Tyson trained and fought with a system called “peek-a-boo” created by his trainer Cus D’Amato.

D’Amato created this system based on old boxing books, which combined techniques from wrestling, fencing, and boxing

While Tyson was famous for his punching power, his defensive skills were a huge part of his success. Peek-a-boo’s guard is 50% offensive and 50% defensive, which allows fighters a fast counterattack for every defensive move.

This fighting style works better for short-distance fighters, and a fast head move allowed Tyson to slip far enough to get out of reach quickly and to make enough space for a powerful hook

Cus D’Amato’s fighters were not so tall, his boxing style worked better for short fighters, who had a lower center of gravity, and could work faster and much closer to their opponents.

A commonly overlooked component of Peek-a-boo is footwork.

Tyson used his footwork to rapidly chase opponents, but also to get as close as possible to their core, placing his rear foot near his opponent’s lead leg, standing almost parallel to them.

Apart from Mike Tyson, other boxing champions such as José Torres and Floyd Patterson trained and performed with this system.

And as MMA combines things from lots of different disciplines, being boxing one of the main influences, it takes us to our main question:

D’Amato’s method is not as popular nowadays in boxing, since the sport has grown and changed a lot, so you could think: why would it work in another discipline?

As it happens with a lot of different combat styles, it might not work as a whole philosophy, but some of its parts can be useful.

As a matter of fact, we have actually seen fighters use some parts of the peek-a-boo style inside the cage, specifically these two parts:

This is one of the components that made fighters like Tyson so unpredictable in the ring. Peek-a-boo training works a lot with the ability of speed, which is required when fighting near your opponent.

In MMA, fighters usually prefer striking from distance instead of really digging in. But in case of a close exchange, having quick responses can make the difference

Sometimes, when a fighter goes so deep into the opponent’s guard, both fighters change stances and end up facing each other in a southpaw stance.

But to do it you have to move quite far forward, leaving you wide open as you move.

Athletes like Demetrious Johnson have incorporated this technique, by clinching whole shifting, controlling his opponent’s posture and guard as he changes position. This means that footwork is applicable when combined with wrestling techniques.

Apart from that, this fighting system is not that practical for MMA, since it requires minimizing the distance with the opponent, which can be too dangerous for a discipline where strikes can come in so many different forms.