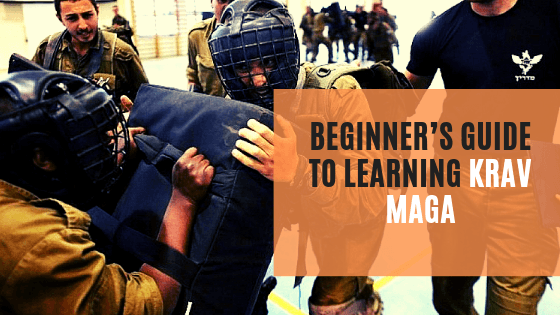 “The moment you get attacked, you are not the victim. You become the attacker.”
This summarizes Krav Maga’s core principle perfectly. Survival is a must, and it has no rules. The official self-defense system of the Israeli Defense Forces, Krav Maga can be a deadly weapon in the hands of those who master it.

Your age, size, and fitness level are irrelevant. Krav Maga is for everyone. True, it’s an intense workout, and it can be a bit of a challenge if you haven’t worked out in the past. But with practice, you’ll develop physical and mental strength, and you’ll be able to face an attacker no matter how adverse the circumstances might be.

Krav Maga includes moves from western boxing, muay thai, jiu-jitsu, and other martial arts. And yet, it believes in instinctive reactions rather than orchestrated movements.

In this post, we’ll explain the fundamentals of Krav Maga in theory and…in practice so that you can train Krav Maga even at home!

Neutralize the threat: Do what it takes to survive. Period. In Krav Maga, you don’t stop until the threat is eliminated and you’re completely safe. Mind that it must be done fast, and you should remain unharmed.

Simultaneous defense and attack: In this practice, you must perform offensive movements at the same time you’re defending yourself. Every second counts, too. Your offense must start immediately so that your attacker is discouraged from keep attacking you and you get out of combat fast.

Continuous motion/explosion of violence: You can’t pull off simultaneous defense and offense unless your moves are explosive. That is, continuous, fast, repetitive, and aggressive.

Simple moves/natural reactions: Krav Maga is not about performing routines. It’s about surviving under sudden and severe threat. You are called to choose your defense/offense instinctively based on the kind of danger you’re encountering. Your moves must be simple and efficient.

Use any weapon available: Any weapon can be used in combat, including guns and knives. Before it gets to that, you can use stuff you carry with you or find in your surroundings, e.g. keys, belts or a bottle.

Self-defense skills: When it comes to self-defense, Krav Maga is second to none. Krav Maga training involves inducing the practitioners stress and placing them in unfavorable situations, like getting attacked from behind or in the dark.

Stress relief: This practice is a great way to let some steam off since it provides a channel to release tension and negative feelings through repeated, aggressive moves.

Improved fitness level: Krav Maga is a demanding physical activity. Expect a dynamic warm-up and stretching, cardio, and strength training in every session. The results on your body and stamina levels are fast and impressive as long as you show up regularly.

Increased alertness: This powerful self-defense system teaches you to observe what’s going on around you, to see the danger approaching, and ideally avoid it altogether without having to engage in combat.

Confidence: Krav Maga focuses on handling real-life situations. It gives you the skills to fight back a thief asking for your money in a dark parking lot. Once you realize that you are able to defend yourself and anyone in need, you’ll be walking around a different person.

Why does Krav Maga have a bad name?

Imagine Krav Maga as the “bad boy” of martial arts. It engages in street fights. It allows for some rather appalling and second-rate techniques like eye gouges and fish hooks. No wonder why many people find it repulsive and have no respect for it.

The thing is, Krav Maga was not created for tournaments and shows. It was created for real life, and in real life anything can happen. It’s not about taking your attacker down and inflicting damage, either. It’s about avoiding getting in a fight in the first place and, if it’s too late for that, finding the quickest way out. Moves like that are not a Kravist’s first choice – they are their last resort. And to be honest, chances are you’ll never have to use them!

Another issue is the quality of Krav Maga schools. Many schools have unqualified instructors with little to no experience, or offer incomplete training that doesn’t include sparring classes. Choosing the right school is entirely up to you. All you need to do is some research.

Check online for reviews and history, ask around. Most importantly, speak with the instructor to learn about their qualifications and experience, and to get a feel about their mindset. Ask about the classes they’re offering. Make sure sparring classes are included, or else don’t bother joining at all. If they try to convince you that the progress is going to be fast and easy, something is off.

We mentioned before that awareness of your surroundings is a big part of Krav Maga training. To that end, kicking and punching in thin air is no use. You can still practice your moves alone at home, of course. But if you want to work on your reflexes and make it feel as close to a real attack as it gets, use a partner.

Preferably someone who practices Krav Maga and knows what they are doing. In any case, wear some protective equipment like gloves and headgear to avoid injuries, and do a warm up. Ready? Let’s start!

Krav Maga’s basic stance is very close to your natural standing pose. Your upper body is turned sideways so that your weak arm faces your attacker.

Your legs are slightly bent, and both your hands are made into fists, just below eye level. For a strong fist, remember that your wrist must be straight, and your thumb over the pointer and middle finger. Assume this stance for your practice. 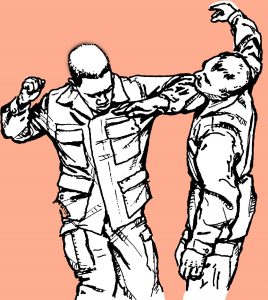 Elbow strikes are mostly targeting your attacker’s face. Below are three basic variations:

Vertical: This strike should land on your attacker’s chin. With this in mind, bend your arm and sweep it up until it hits the target. If you practice alone, you should stop at about ear level.

Horizontal: Aiming for the chin or the temple, lift and sweep your arm from left to right or in reverse.

Diagonal: Still attacking the head of your attacker, sweep your elbow from high right down and across to the left or the other way around. You can also start from the low right and move up to the left or vice versa. 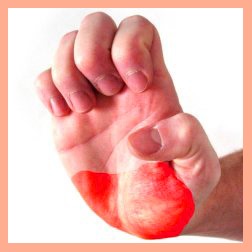 Open your palm facing up and hit with the bottom part of your hand, near your wrist. This strike is used to hit the attacker’s chin. Although it’s pretty effortless, it’s very powerful and can knock your attacker right down. 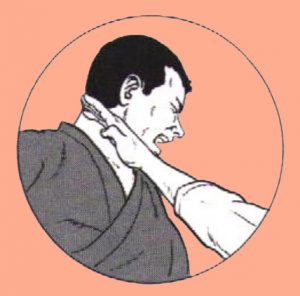 Another effective and simple strike. Just extend your fingers and place your thumb against your index finger. Tighten your wrist and hit with the part at the base of your little finger. The neck and the throat are very vulnerable to this strike, but you can use it on any other part of the body as well.

Stopping a strike on the face 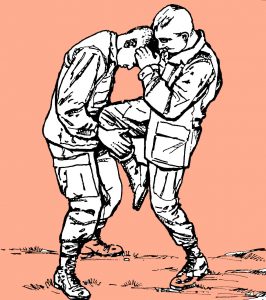 Knees are often used as a weapon in Krav Maga. Given that they can attack the groin, solar plexus, or even head, they can do some serious damage! The key is to keep a strong knee and have control of your movement. Whether you use your hands or not, keep them up and close to your face in fists so that you are ready for defense.

To do a knee strike without using your hands, drive your hip forward while you keep your base leg straight, slightly lean back and kick, keeping your knee bent.

If you want to use your hands, one thing you can do is grab your partner by the neck with both hands and pull them down, keeping their chin down and at the same time kick them with your knee facing up.

So, there you have it! You now know the basics and can practice a few simple, but life-saving Krav Maga moves at home. Like we said before, Krav Maga can be challenging at first because it’s physically demanding. After all, its mission is to prepare you for the worst, and you need to be in perfect shape for that. Give it a go, and it will do both!