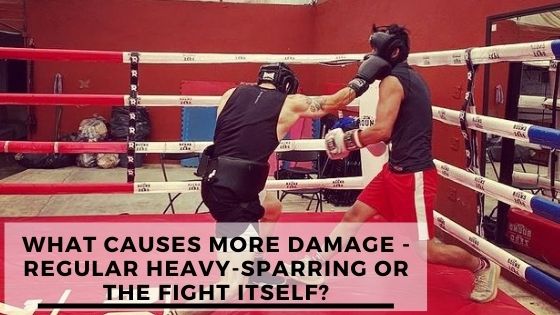 Head trauma is always a risk when it comes to combat sports.

Very simply, brain damage occurs whenever your head gets hit and, therefore, it is a central concern for boxers.

But what causes more damage: regular heavy-sparring or an actual fight?

We will explore this question in this article.

There are a few key points to note. Firstly, there’s still a lot of research to be done on the long-term implications of sparring.

Though it’s clear that chronic blows to the head increase your risk of neurological problems, symptoms vary between different fighters.

For example, there’s not a linear relationship between the number of hits a boxer takes and the degree of brain injury.

Some people tolerate and recover from punches quicker than others.

Also, a key distinction to make is between severe trauma and cumulative trauma.

In most cases, the damage done in boxing tends to be cumulative, rather than severe (or immediate) – meaning, in many cases, the effects appear and worsen over time, through repeated blows.

Since, for fighters, most of the punches they take are in training and not in a fight, a lot of the cumulative damage can actually be caused in sparring.

This is why it’s important to be smart about your training.

Hard sparring should only really be used in fight camp (or the lead-up to a fight) and even then, it should be used occasionally.

Sparring, after all, is a place to improve your technical ability in the ring, not to beat each other up.

Whenever you’re walking into a boxing gym, it’s important to leave your ego at the door – not just for your sake, but also for others in the gym.

In boxing, the larger danger comes from not allowing for proper recovery – i.e. fighting with a concussion or mild concussive symptoms.

This is more likely to occur through regular hard-sparring as, after a fight, fighters will take time off to allow for greater recovery.

The reality is, that being hit in the head is an unavoidable part of boxing if you’d like to actually compete.

Though the consequences can never be fully eliminated, they can be mitigated by prioritising lighter sparring and allowing for adequate rest and recovery between bouts.

There are only so many hits to the head anyone can take.

Train smart and use the minimum amount of hard sparring necessary.

In most cases, the damage from regular hard sparring will outweigh the damage done from an occasional fight.