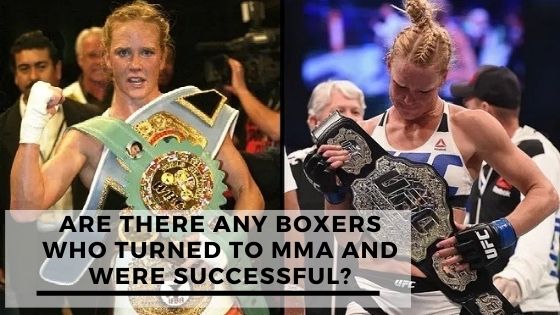 Boxing and mixed martial arts (MMA) have some similarities and differences, some of which are distinct and easily noticeable.

One of such differences is the use of legs in MMA – leg kicks are allowed in MMA but not in boxing.

Over the years, quite a handful of boxers have crossed over to MMA.

Some of those who switched to MMA were successful, while some were not.

We will look at some of the boxers that had a successful stint in MMA.

Boxers that had a successful career in MMA

Some of the boxers that had a successful transition from boxing to MMA are:

He was successful as a boxer, winning 17 out of his 20 fights. Marcus Paul switched to MMA in 2003 and went on to win 23 of his 35 matches – a successful career by all standards.

Ray, a one-time WBO heavyweight champion, began his career as a boxer in 1989 and won 36 out of his 44 boxing bouts.

He notably won gold in the 1988 Olympics as a heavyweight boxer.

In 2007, he tried out his luck in mixed martial arts in a non-sanctioned exhibition against Kimbo Slice, a match he lost in the first round.

Ray’s die-hard spirit got him a first MMA victory in 2009 against Tim Sylvia – former UFC heavyweight champion. What a come-back!

Holly holm began her successful boxing journey in 2002; she started with boxing and kickboxing.

Her boxing career lasted for twelve years (2001-2013); it was a successful one – multiple-world champion.

Holly won 33 out of her 38 matches as a professional boxer.

Holly holm started her MMA career in 2011 with a fight against Christina Domke, a duel she won in the second round.

This bout marked the beginning of great things to come.

She still fights in MMA and currently holds the record as the only fighter to win a world boxing title and a UFC title.

She has an MMA record of 20 matches with 14 wins, and 8 of those wins were knockouts.

Holly Holm has one of the most successful transitions from boxing to MMA.