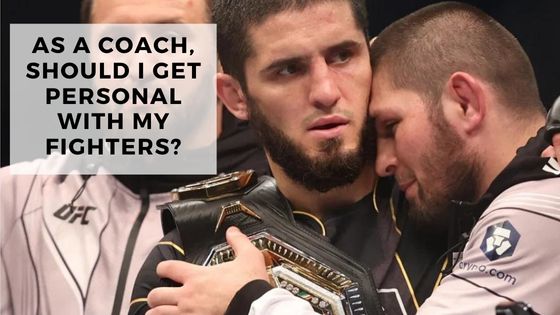 As a coach, should I get personal with my fighters, or should I keep it only professional?

Combat sports are different from sports like football, basketball, etc.

MMA, boxing, kickboxing, Muay Thai, etc. are all sports that tap deep into one of the most basic human instincts which is fighting.

A football or basketball coach could have a great run with their team while keeping the relationship extremely professional and all based on strategies, tactics, and performance.

In fighting, things are different.

When your fighter enters the ring or the cage, survival mode triggers a mix of different emotions that are very instinctive.

The adrenaline rush, crowd anxiety, the fear of getting fatally injured or knocked out, the fear of humiliation, etc. All these are emotions that all fighters experience in fighting, regardless of their level.

Even the biggest MMA and boxing stars have admitted to feeling these emotions.

The problem with fighting is that once the fight gets hard and your fighter gets dragged into the deep waters, survival instincts take over and they stop being mentally there 100% to listen to your suggested strategies and tactics as a coach.

You can’t give logical instructions to an out-of-breath fighter who barely hangs in there for dear life.

Let’s say you are cornering your fighter for their last round, and they are tired, injured and feeling dizzy from the impact of the blows they took on the head.

All this will put your fighter in a very dark state where they want to give up.

The only way to counter this state of wanting or thinking about giving up is by triggering other emotions that will give your fighter a second wind of hope, courage, and determination to win.

You cannot talk to your fighter emotionally if you don’t have a personal relationship with them.

If you are just a professional coach who gives strategies, instructions, and tactics, you will not know the emotional needs of your fighter.

You need to know everything about their life, their ambitions, their fears, their relationships, their surroundings, their dreams, etc.

Your fighters also need to trust you and know you on a personal level and respect you, so they can listen to you in their weak state.

To achieve this, a personal relationship has to be there between you and your fighter.

Some coaches are cool and calm, some offer detailed technical advice…@Leon_edwardsmma needed a kick in the backside, and he got it 😳

Having a personal relationship with your fighter doesn’t mean you become their roommate. You should still keep being charismatic and respected.

Your fighter will not listen to you if they don’t respect you.

Khabib Numaromedov is one of the best examples of a coach who has very intimate relationships with his fighters, but at the same time, they still have a lot of respect for him.