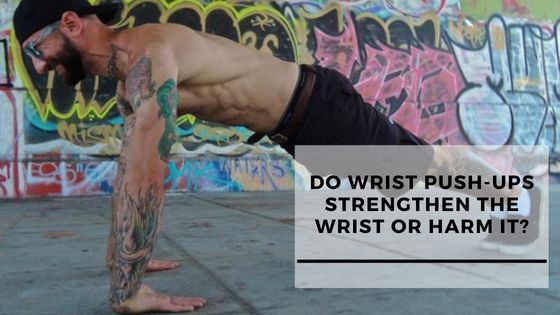 Push-ups are a simple calisthenic exercise that offers so many benefits to the body.

By lifting and lowering the body from a prone position using the arms, this exercise strengthens a wide range of muscles, from pectorals to deltoids and more.

There are many variations of push-ups:

In this article, we look at wrist push-ups and how effective they are.

Wrist push-ups are a variation that involves placing the wrists on the ground instead of the palms.

It is assumed that they strengthen the wrists, but this is a misconception.

As a matter of fact, wrist push-ups do not strengthen the wrist, instead, they are dangerous and can lead to injuries or weakening of the wrists. Here’s why;

The human wrist has a recommended maximum flexion angle of 80 degrees. However, to execute wrist push-ups, you are forcing them into a 90-degree angle, risking damage to the wrist bones or ligaments.

The wrist is a joint, and not a muscle, and its movements are controlled by muscles in the forearm.

To strengthen the wrists, one should look towards exercising those forearm muscles.

Here are certain exercises and stretches that do help strengthen the wrists and improve their stability.

Wrist curls can be done with light dumbbells or resistance bands. It involves sitting and holding the arms at 90 degrees, both arms resting on the legs with palms facing up.

The exercise itself involves curling the wrists up and down gently. When using dumbbells, it is important to do this with light ones, preferably 1-5 pounds.

Do this in reps of 10, or higher, depending on your level.

This can be done using a tennis ball or anything squeezable with enough resistance. Squeeze as hard as you can, release and repeat.

Wrist walking involves standing before a wall, placing your arms against the wall and walking your arms down the wall as far as possible, then back up.

This can be done by stretching one arm straight in front of you in a stop gesture.

Then use the other hand to slowly push back on the fingers of the outstretched arm.

Do this till you feel resistance. Repeat a few times as required.

Hold light weights in each hand, and stretch your arms out in front of you.

Gently rotate your wrists in opposite directions (one clockwise and the other counterclockwise), making circles in the air with the weights while keeping your arms fixed.

Then rotate your wrists back in the other directions.

These are some of several exercises that are healthy for the wrists.

When done correctly and with moderation, they improve strength and stability in the wrist and forearms.