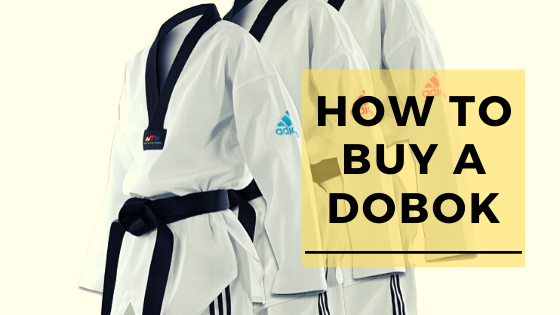 One of the most differentiating characteristics of the Taekwondo dobok is its “V” Neck. In contrast to other martial arts such as Judo and Brazilian Jiu Jitsu which have uniforms with two pieces folding over each other, the taekwondo uniform has a pullover top.

It might be true that thick uniforms can last longer but this is not an issue in taekwondo.
the lack of grappling in Taekwondo allows the uniform to be thin and light.
Doboks in taekwondo are very lightweight compared to other martial arts’ uniforms. most doboks don’t weigh more than 300 Grams (10 Ounces). This is due to the acrobatic nature of taekwondo which requires speed and agility.

The thinness of doboks allows for snap sounds which are a very important aspect in poomsae (forms equivalent to Kata in Karate).

In promotion tests, in order to acquire higher belts, taekwondo students have to perform a poomsae in front of a jury. All the moves of the poomsae have to be performed with force and explosiveness which result in a snap sound of the dobok.

Belts should be long sufficiently to go around the waist twice, they should not be too long. In my Dojang, I have seen beginners with long belts dangling to the knees, some of them are even hurting themselves by kicking the belt back to their eyes when performing kicks such as Ap Chagi (Front kicks), Miro Chagi (Puch Kick) or Naeryo Chagi (Axe kick).

When buying a cotton dobok shrinkage is to be taken in consideration. Cotton doboks shrink by 5-7% after the some few washes, especially the lower quality doboks. So always go for a slightly bigger size.

Polyester and cotton blends shrink less than cotton, but polyester doboks are the ones that shrink the least.

When choosing a size for your dobok always go for one size larger because of the shrinkage.

There is not a unified sizing chart for all manufacturers, some have a sizing chart based on the height of the individual in centimeters, others have charts starting with triple-zero (000) and finishing by 7.

Washing and drying your dobok