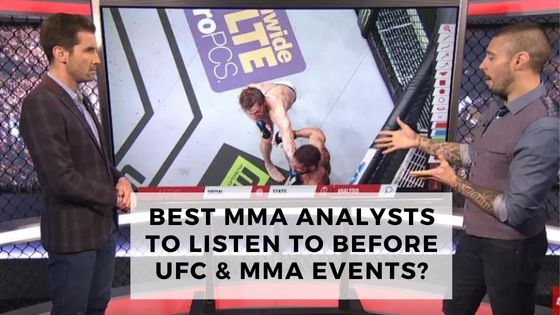 This is hands down the best of them all!

Former UFC welterweight and former UFC commentator is the best at doing it. His analyses are deep, they include all types of statistics about fighters, strategies, fighting habits and patterns that fighters have, etc.

Dan Hardy spends days studying footage of fighters, if you watch his videos you will see how much knowledge he gathers about fights, to the point of getting overwhelmed by the amount of information.

Henry Cejudo aka Triple C is an Olympic champion and a former double UFC champion.

After he relinquished his two belts in the UFC and retired from MMA, he started a career in coaching. The man is simply a wizard and knows it all.

Although Luke Thomas was never a fighter, his MMA analyses are always on point.

Luke Thomas worked as an MMA journalist for over a decade, a real die-hard fan of MMA who likes to say it as it is.

His opinions in the past got him into trouble with Dana White and the UFC, for this reason, Luke Thomas was never a very welcomed journalist in UFC events.

After working for almost a decade with mmafighting.com he chose to start his own Youtube channel where he makes his analysis videos.

Daniel Cormier was a double UFC champion and an Olympian wrestler. He is considered one of the greatest UFC heavyweight fighters of all time.

Although he has an unlimited amount of knowledge in MMA, we put him at the bottom of this list because he is criticized for not watching fight footage extensively.

Dominick Cruz said it clearly in one of his press conferences, where he blamed Cormier for not watching a lot of footage of fighters and not doing his research on a deep level.

Afterward, both fighters sat down and discussed it on video. The video is still online.

It is worth mentioning that there are other fighters who have MMA Youtube channels, but what they do is not pure technical analysis, generally, they are more into MMA news, which is why they were not included on the list.