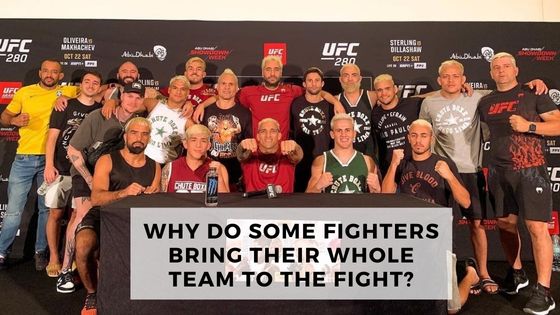 Many fighters in the UFC are known for bringing all their team members to the fight. The Diaz brothers started this tradition in StrikeForce and brought it to the UFC later.

A few years later, a new generation of fighters adopted the same tradition and took it up to the next level. Khabib Nurmagomedov was known to bring more than 40 members of his team to fight week.

Conor McGregor once flew more than twenty members of his team on a private jet to attack Khabib’s bus in New York, as a response to Khabib threatening his teammate Artem Lobov.

On the other hand, even huge stars are known for coming to fight week accompanied by their coach and a few team members.

Why do fighters bring their whole team to the fight?

Usually, the fighters who bring their whole team to the fight are fighters who have beef with other fighters, they do that to avoid being outnumbered by their opponent’s team.

Take Artem Lobov as an example when he was cornered by Khabib Numagomedov’s team.

Khabib confronted Artem Lobov about something he said on the media, he grabbed him by the back of the neck and talked to him in a humiliating fashion.

That’s why Conor decided to bring all his team in a private jet in defense of Artem Lobov, his loyal teammate.

Does the UFC pay for all team expenses?

The UFC does not treat all the fighters the same, the biggest stars are not treated like normal fighters.

For example, when Charles Oliveira fought Islam Makhachev, the UFC took care of all travel expenses to Abu Dhabi for his team. The UFC also did the same thing for Islam Makhachev’s team.

On the other hand, the UFC would never do that for a fighter who is not a big star.

After all, the UFC treatment depends on how much draw power the fighter has, the more eyeballs you can draw the more privileges they can get from the UFC