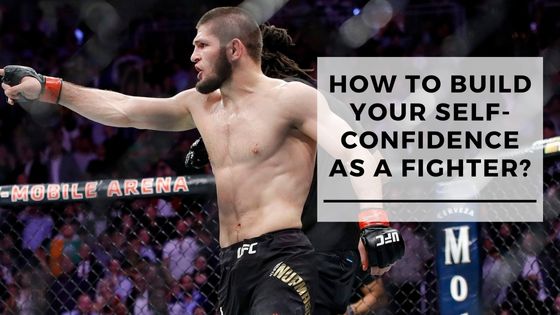 When self-confidence gets to its lowest, the fighter doesn’t perform to their best and starts losing their sharpness in fights.

If you are going through such a period, then it’s totally normal, even if you are a well-experienced fighter.

There are two ways to build your self-confidence as a fighter:

1. Go to a sports psychologist

Going to a sports psychologist is excellent, and it could help the fighter to start building that confidence. Still, according to the legendary MMA and Brazilian jiu jitsu coach John Danaher, the ‘pep talk’ as he described it once in a podcast could give you an entrance, but it is not enough.

And this is where we explain the second way to build your self-confidence as a fighter.

2. Build it on reality (step-by-step)

What does that mean?

The method that John Danaher uses with his fighters is a method based on building self-confidence on a step-by-step basis.

The theory starts with this question: “how confident are you that the sun is going to rise tomorrow?”

Simply because it is based on experience. Throughout all your life, you have been seeing the sun rising every day, and that gives you confidence that the sun will always rise tomorrow.

The same thing happens in fighting, if the fighter is used to winning and is undefeated, their self-confidence is simply through the roof. Why? Well, it is simple, it is because they have never lost and all that they have experienced is winning.

Now, obviously not every fighter can build that clean “Khabib” record, but there is a way to build that self-confidence.

A fighter should never bite more than they can chew even in the gym! It is good to get humbled at the beginning by better fighters, but keeping getting beat by better fighters all the time will crash your self-confidence and hurt you more than it will benefit you.

The key is to spar or roll (depending on your sport) with fighters who are just one level above you, fighters who have a set of skills slightly better than yours but not out of your league.

Once you start submitting them or beating them, then you get to the next level, little by little until you get to the masters of the game in your gym.

Does that mean you shouldn’t spar with the elite of your gym?

Obviously not, a good dose of humbleness will always give you a grip on reality and let you know where exactly your skills are situated on the map.

But it shouldn’t go above 20%, the other 80% of your sparring should be with fighters who are just one level above you.

If a well-experienced coach is training you, they must already know this approach, so you might already be under the process without knowing.

But sometimes average coaches are not aware of this approach and end up breaking their fighter’s self-confidence without knowing it.

The world of boxing already knows this practice, it has been a long time since boxing managers have started building up their fighter’s records and self-confidence little by little.

On the other hand, the world of MMA isn’t used to that, Khamzat Chimaev for example made his UFC debut with only 6 professional fights on his record, this is something you wouldn’t find in boxing.

In boxing, a fighter who has 6 professional fights is still considered at the very beginning of their career.

How can you adopt this approach in MMA?

So if you are one of these people, start with competitions in your own sport, also gradually.

Once you enter the world of MMA, start building up an amateur record slowly, don’t bite more than you can chew, it will hurt your self-confidence.

Not all fighters are the same

The realistic approach we explained is the approach that most experienced coaches adopt, it is also the method that most human beings need to build confidence, in all walks of life.

But there are exceptions, take Khamzat Chimaev as an example, some fighters have this natural gift of not needing to have a long record of fights to build up their confidence.

This depends on several things, life experience, types of experiences, and genetics also.

So assess your own skills, know where you are, and don’t go over your head, and you will build iron confidence.