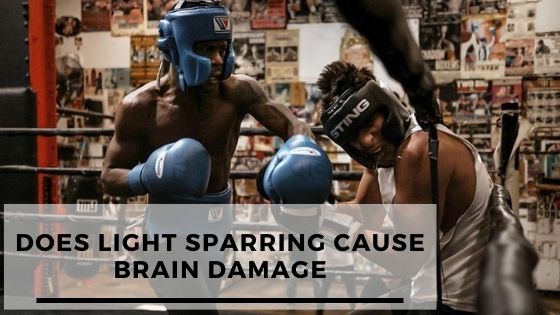 This article will look at sparring before a boxing match and find out if it plays a major role in causing brain damage.

For those who might ask the above question, Sparring is a form of training where two boxers will often throw punches at each other, as if in a boxing match.

The main difference between the practice and the real thing is in the intensity.

2. Why is Sparring done by boxers?

Many boxers consider sparring to be one of the most important parts of their training regimen.

It helps them to perfect their footwork, punch selection, defence, and so on.

3. Then what is wrong with sparring?

There’s a growing concern that too much continuous sparring, no matter how light it is, causes more and more fighters.

One recent study showed that when boxers sparred excessively before an actual competition, they were more likely to get knocked out by their opponent than those who didn’t spar as much before the match.

The study showed that if a boxer had recently been in a heavy sparring session, he was 3 times likelier to get injured than if he had been resting instead.

4. So why does continuous sparring increase the risk of injury?

The risk of brain damage is greater for boxers who spar.

A boxer is more likely to get thousands of punches in a sparring session, which increases the risk of brain damage.

The number of punches to the head is counted during a boxing career and it has been reported that boxers receive between 40,000 and 70,000 punches in their careers.

This scary number is made even scarier when one considers the number of “light” punches received during sparing sessions.

In the long run, these continuous hits on the head start telling on the boxer.

One might be tempted to believe it is due to the force of these hits that brain damage occurs.

However, repeated blows to the head, no matter how small, cause small tears in the blood vessels that supply oxygen to the brain tissue.

This causes inflammation which results in swelling and lasting damage to the brain.

5. Is there any way to avoid damaging one’s brain by sparring?

There is no way to completely avoid brain damage caused by sparring, but there are ways to reduce your risk.

You can start by educating your boxers about the risks of sparring, and how to mitigate them.

This will teach them how to protect their brains when they’re fighting, and it will give them a better understanding of what they’re doing when they get in the ring.

Next, you should make sure that you have a well-trained medical staff on hand at all times during training sessions and competitions.

This will ensure that if someone does get injured it gets taken care of right away so that it doesn’t result in long-term damage to their brain.

Finally, you should be sure that all of the equipment used for sparring is tested regularly and maintained properly before each use.